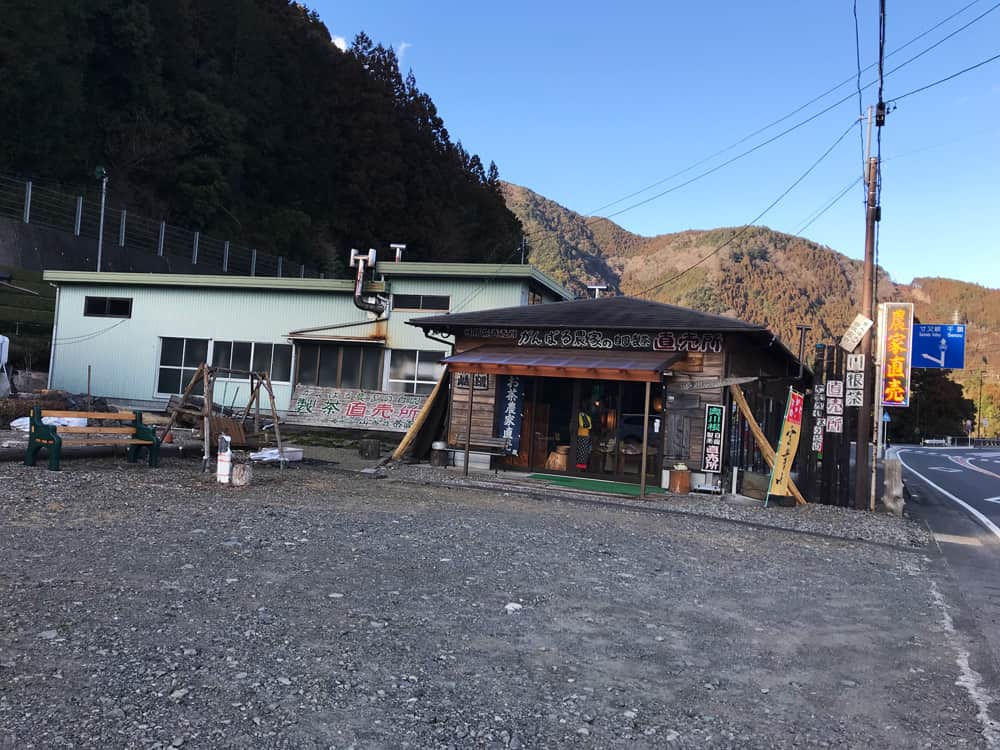 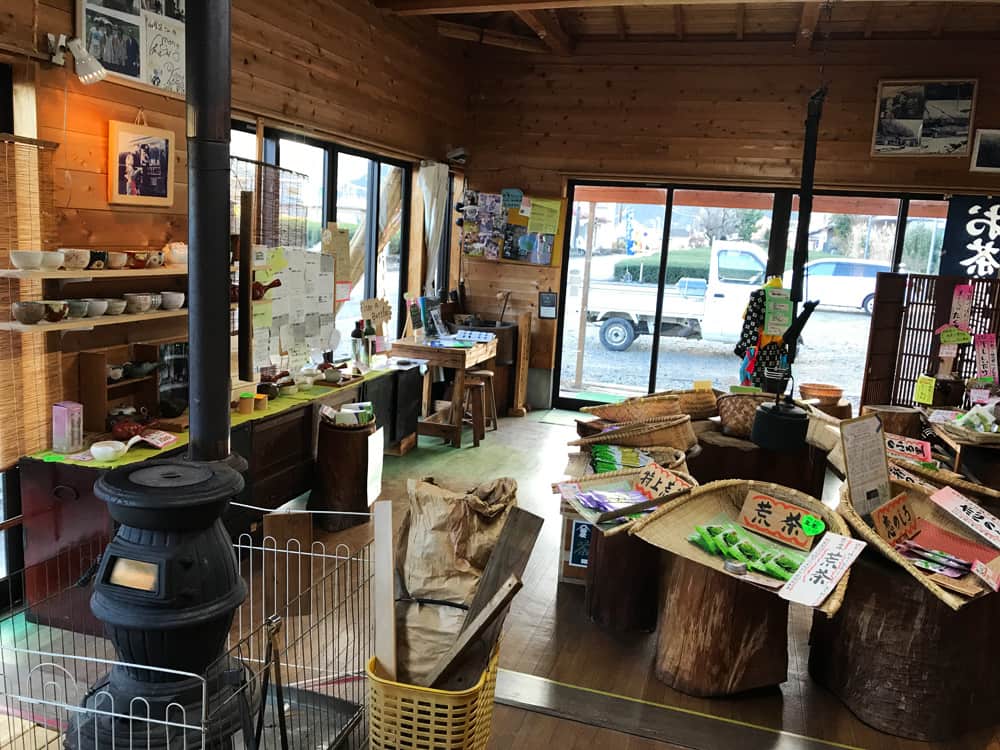 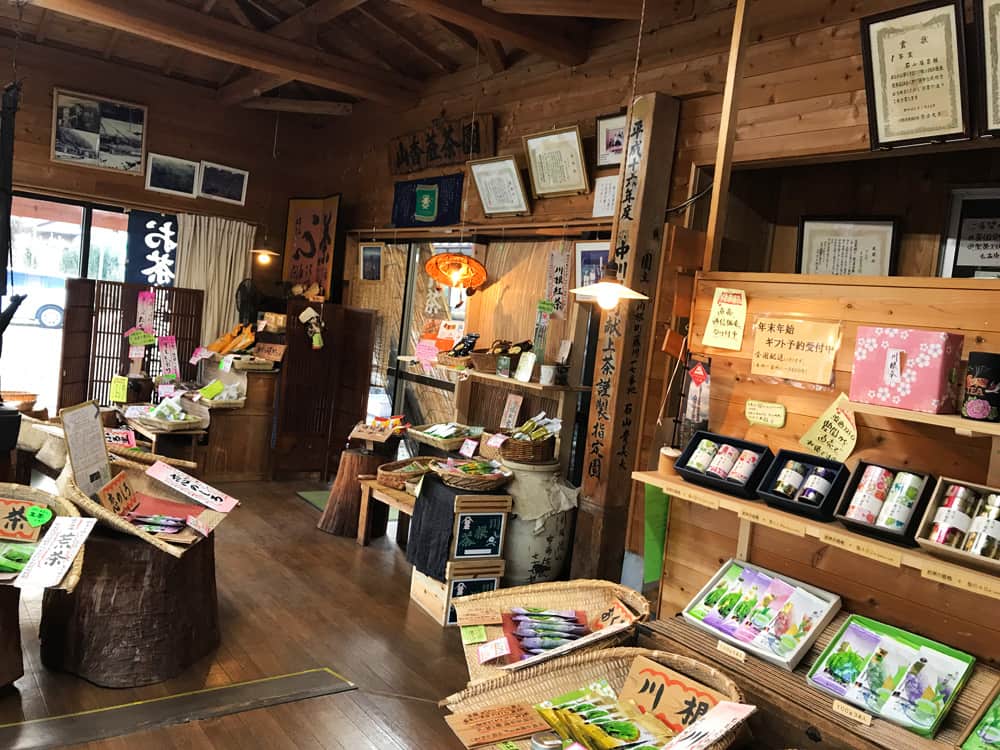 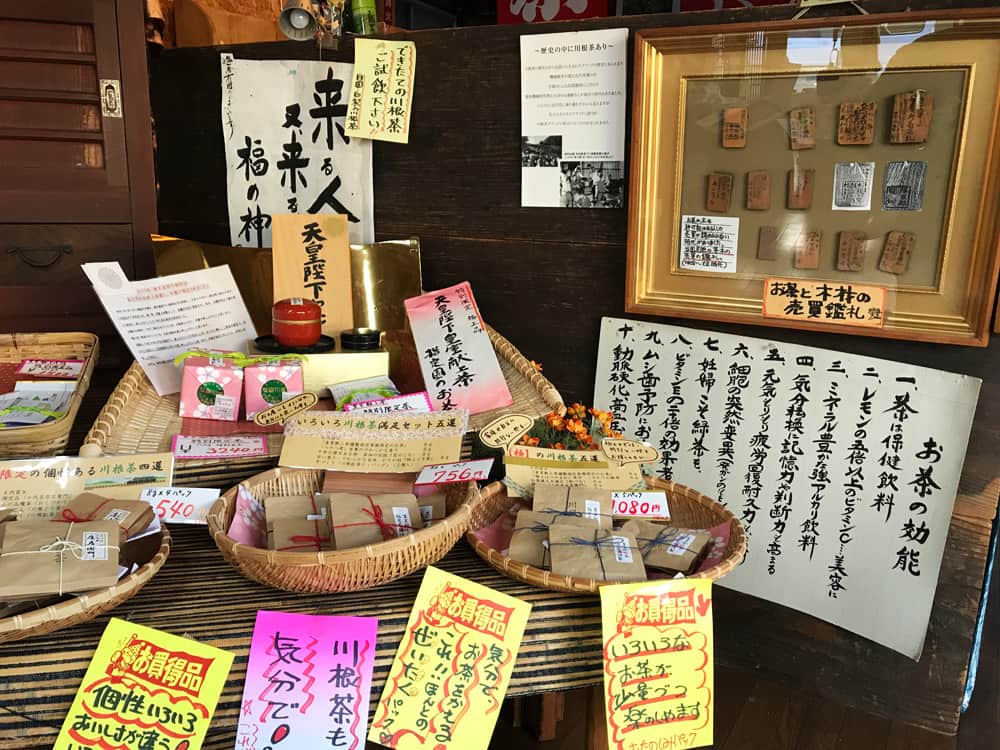 Yamakaso Tea Farm has been only processing Kawanecha for centuries upstream of Oi River in a village Moto-Fujikawa, Kawane-Honcho in Shizuoka Prefecture. To reassure customers from several aspects, the owner Kimio Ishiyama actively obtained the following qualifications:

Besides, their tea is designated as a tribute to the Imperial Family, and they did present it.

In order to deliver high-quality Kawanecha directly from the tea region at a reasonable price, they are consistently engaged in tea producing, processing, and mail-order selling.

I interviewed Kimio Ishiyama, the owner of Yamakaso Tea Farm.

Current situation of the Japanese tea industry from the view of Kimio Ishiyama, the owner of Yamakaso Tea Farm 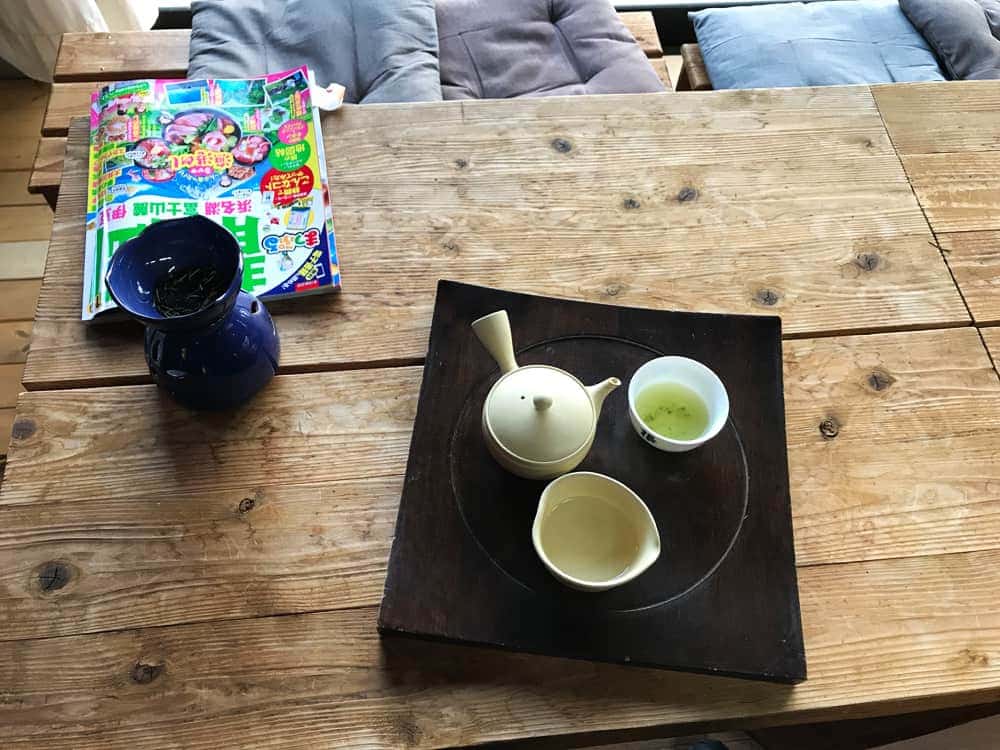 — “How do you feel about the recent tea industry?”

Kimio Ishiyama “I heard that large companies buy tea leaves harvested from spring to autumn at the same price. Then, our survival way is only to focus on more quantity than quality. I’m surprised at the dramatic change in the tea industry.” 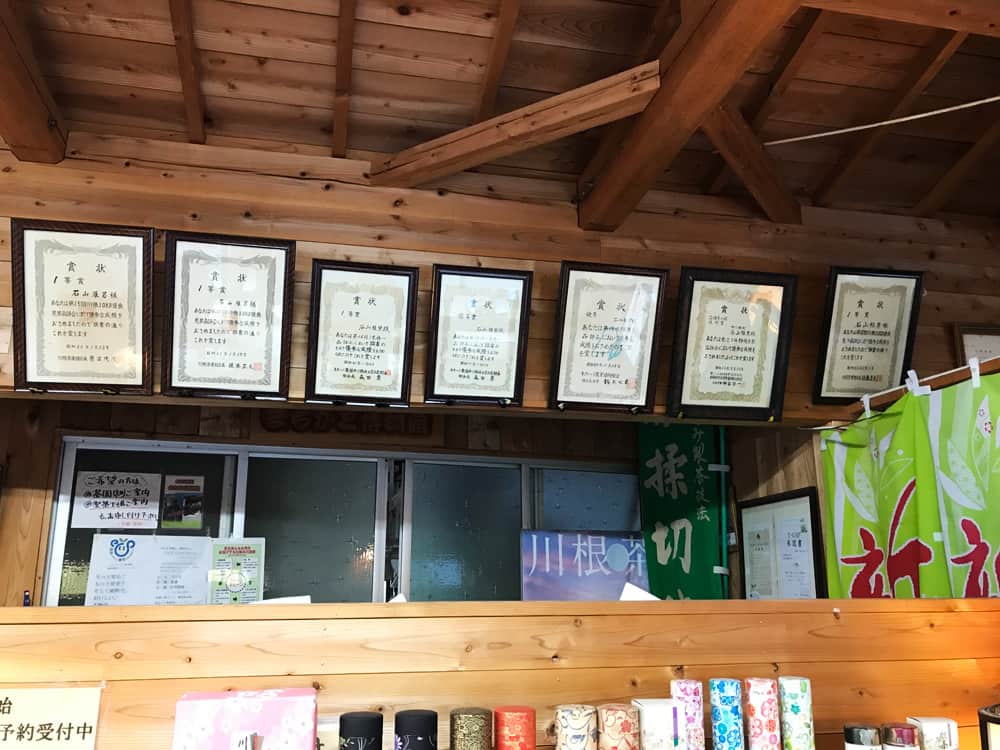 Kimio Ishiyama “Some literature states that in the Edo era, farmers submitted rice as a levy to the ruler while Kawane farmers did tea. Kawanecha has such a long history. Thinking about the deteriorating tea of Shizuoka, I guess farmers and sellers may not promote tea enough or consumers may not need tea. Anyway, so many tea farmers close their business today. Even small farmers used to manage their business with a strong passion, but they’re nearly disappearing.”

— “I think the tea of Shizuoka has good quality. The issue is the promotion strategy. For example, tea of Kagoshima, largest tea region following Shizuoka, has momentum as an emerging area of tea.”

Kimio Ishiyama “Tea of Kagoshima has a history in which the former lieutenant governor of Shizuoka visited Kagoshima, discovered the potential as a tea region, and livened up the area. As a result, Kagoshima came to the current emerging area of tea. In Kagoshima, farmers cultivate and process tea on a gentle land as large-scale agriculture. They replace the soil, maintain the flat farm, and mechanize/modernize the process. I think farmers of Kagoshima always look ahead to the future of tea agriculture.”

— “Shizuoka also has flatlands for tea cultivation like Makinohara. It may be reasonable to promote sloped and flat tea farms separately.”

Kimio Ishiyama “Even the same flatlands have different details on owners in Shizuoka. That’s why farmers of Shizuoka cannot unify their processes like those of Kagoshima do. Kawanecha is suitable for cultivation in a sloped farm, but it’s challenging to cultivate this tea, with a few harvest amounts. Matcha is popular currently, so more farmers are focusing on Tencha. This is because dried and crushed Tencha is Matcha. It doesn’t cost so much comparing to Sencha.” 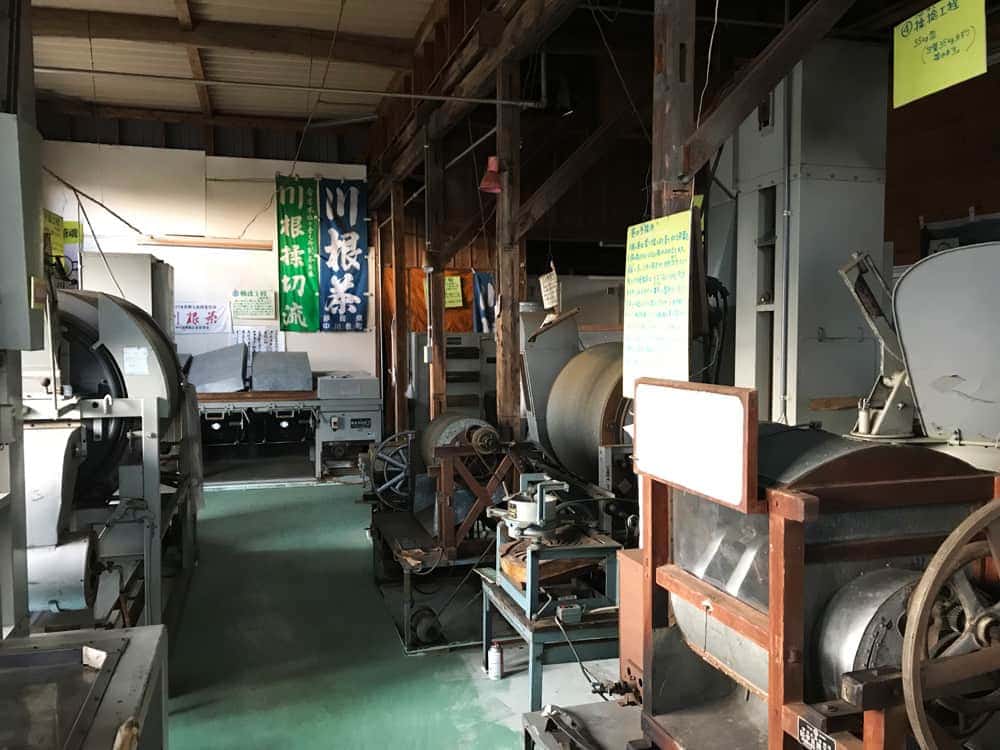 Kimio Ishiyama “Sencha requires a specific technique to process tea, rolling tea by hand, which completely changes the taste of tea. The skill was so vital that chashi (tea master) was one of the occupations in the past. Here you can see this workplace mechanizing the hand-rolling skill.

— “Your tea factory is open to the public. It’s the first time for me to see machines to process tea so closely.”

Kimio Ishiyama “This is a machine to dry tea leaves. Basically, one machine can only perform one manual work. In other words, if there are five patterns of manual works, we need five machines. We changed from manual to machine process. This machine was invented by a doctor in Saitama Prefecture. Once we introduced this machine, the other manual works were mechanized. The doctor is called the father of the tea industry.” 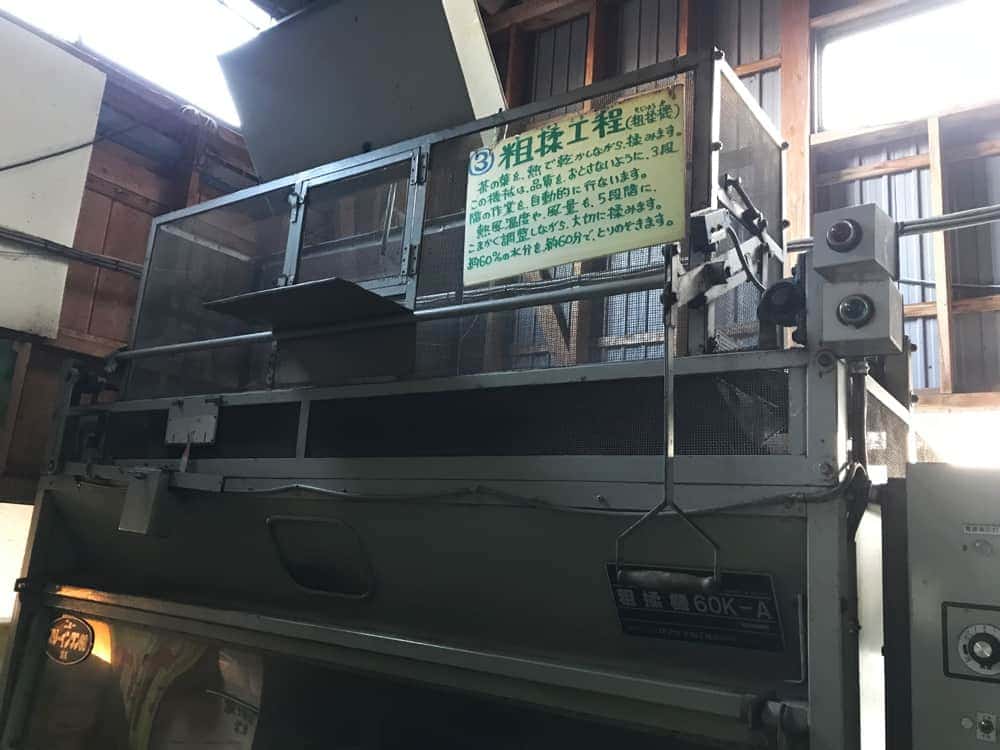 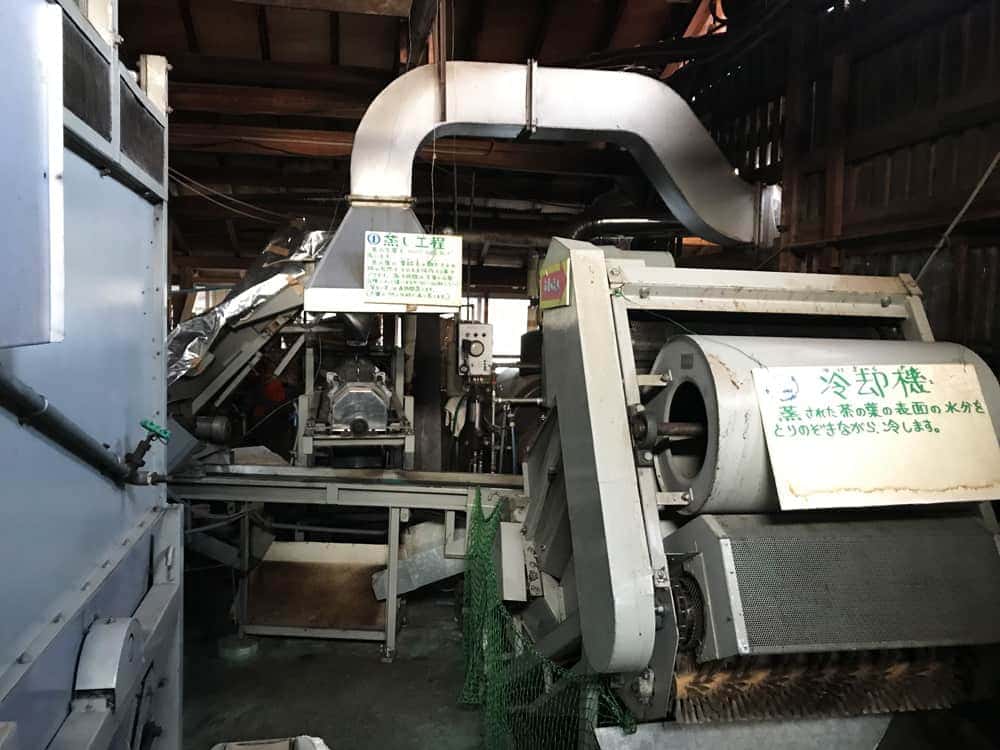 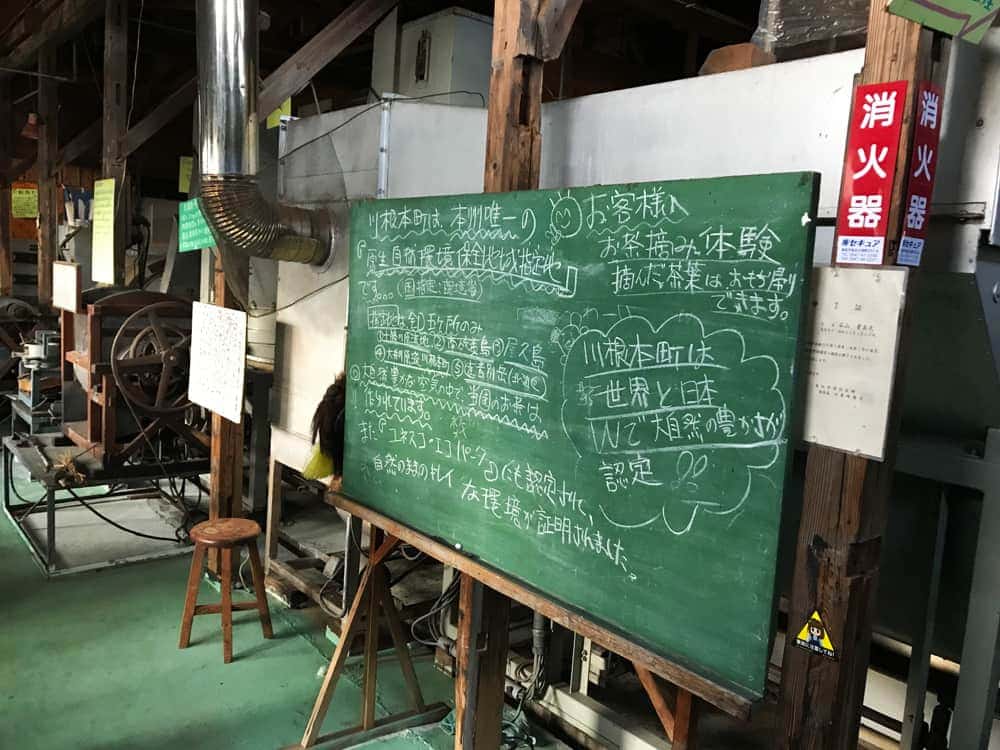 Kimio Ishiyama “Tea has different tastes every time we harvest, once-in-a-lifetime chance. The frequency of the tea harvest is also limited. I wonder how many times I can meet various tea leaves in my life, so we can encounter new tea leaves every time. In addition to the soil, even one plum tree in the corner of the farm changes the aroma and taste of tea. In the past, we believed a blow of wind changed the taste. Tea is such a highly sensitive crop.”

— “I heard that tea merchants felt they had to change something and then started to run a cafe as one of the solutions to the declining tea industry.”

Kimio Ishiyama “Yes, a cafe may be rooted in such a feeling. Without a diversified business, our tea business may not work. Even Nagatanien was a tea wholesaler before. They tried to devise tea for sales and created seasoning powder for rice tea porridge. They’re a large company today. Tamiya was a tea wholesaler too. y originally exported products overseas, and they found the potential of a plastic model overseas. Then, they’re a large company for a model.”

Renovating an old house, they opened it as a teahouse of Kawane tea farm. On the veranda in the house with a colonnade, you can relax with Kawanecha and nature. 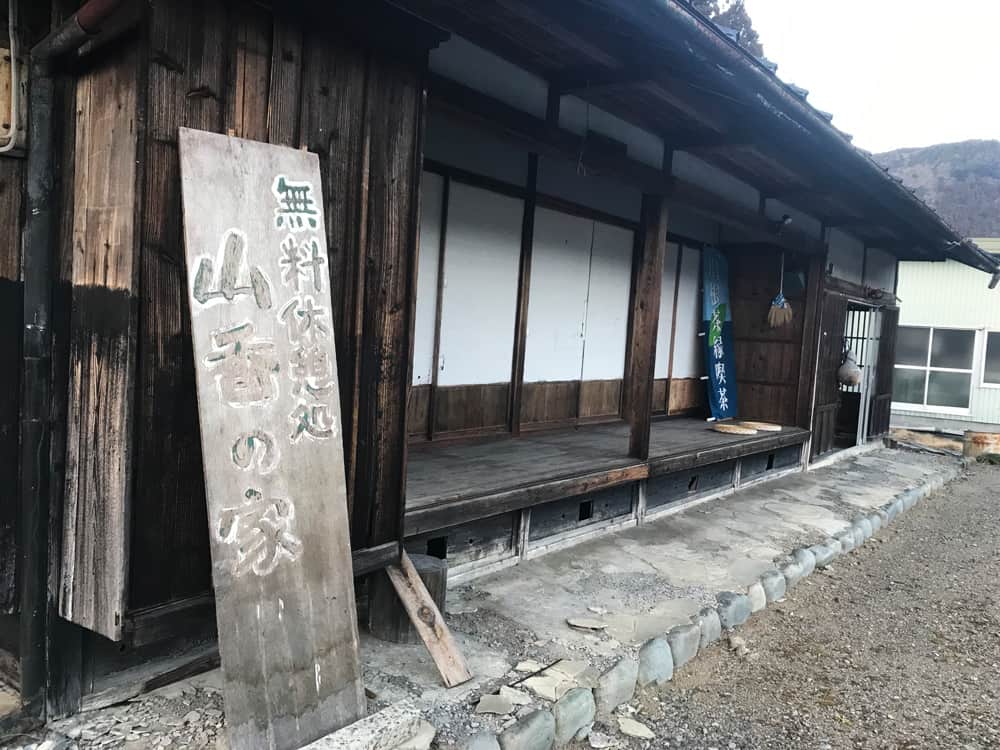 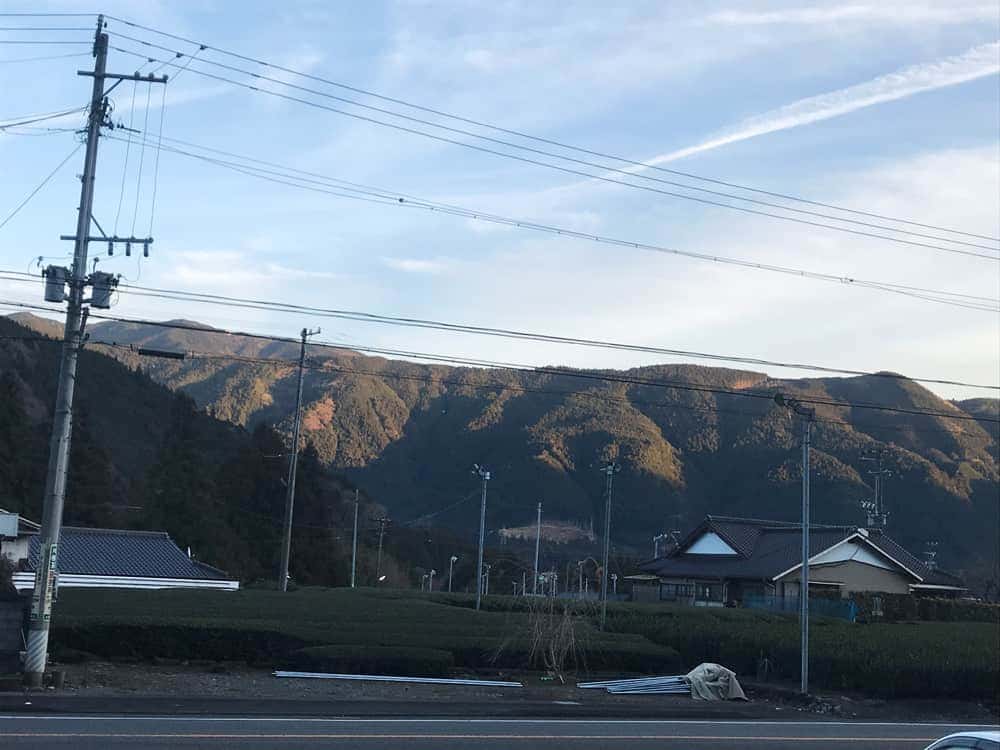 Kimio Ishiyama “Yamakaso Tea Farm runs a teahouse in some seasons. We renovated an old barn to a teahouse. Kawane area has high humidity, so the residents had been sleeping in a house with a colonnade. In the past, there were tea masters, an old type who talked about philosophy and a way of life while drinking tea.”

— “In the old days, people made a soaring room to improve airflow and beat the heat. This house has a historical atmosphere.” 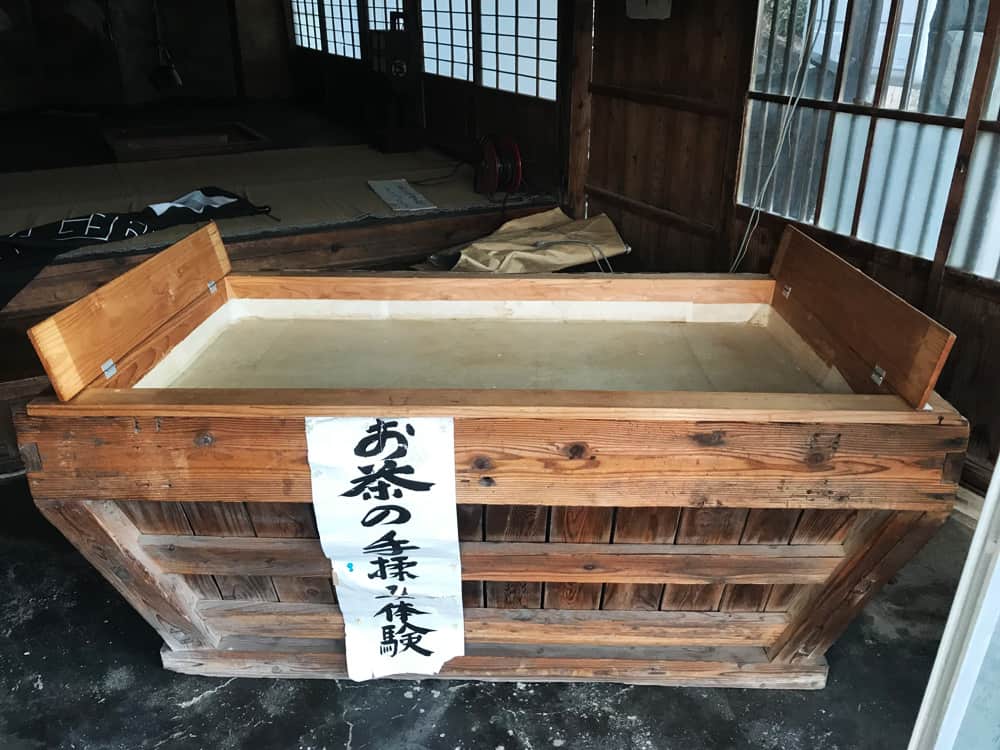 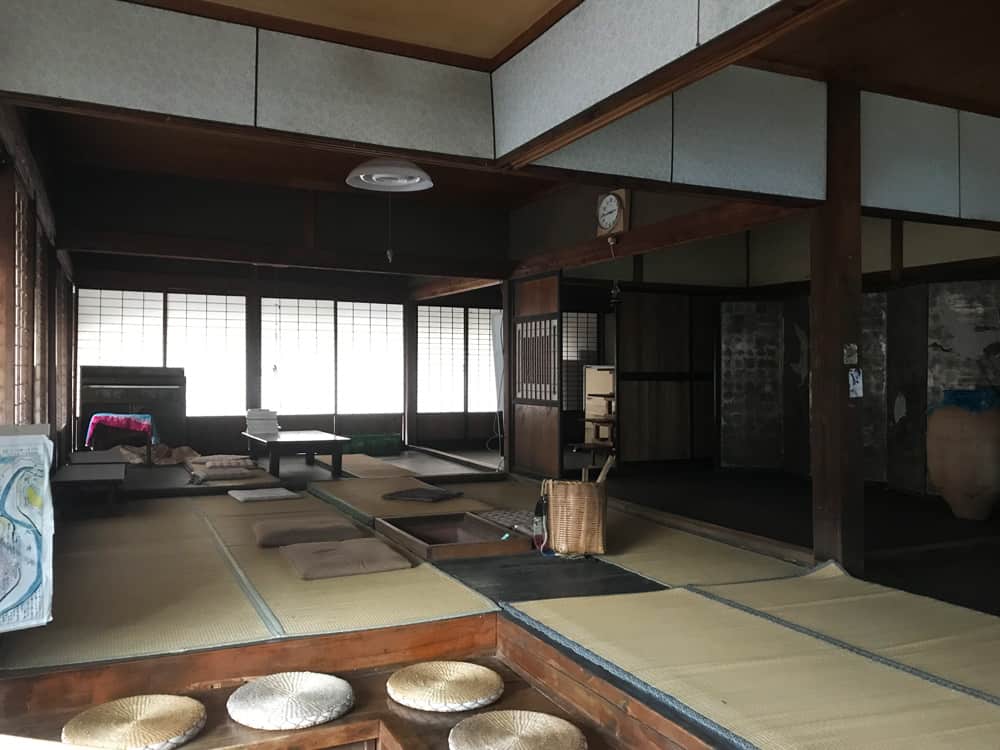 The best quality Kawanecha, designated and presented as a tribute to the Imperial Family, is created by rolling tea by hand in the tea farm 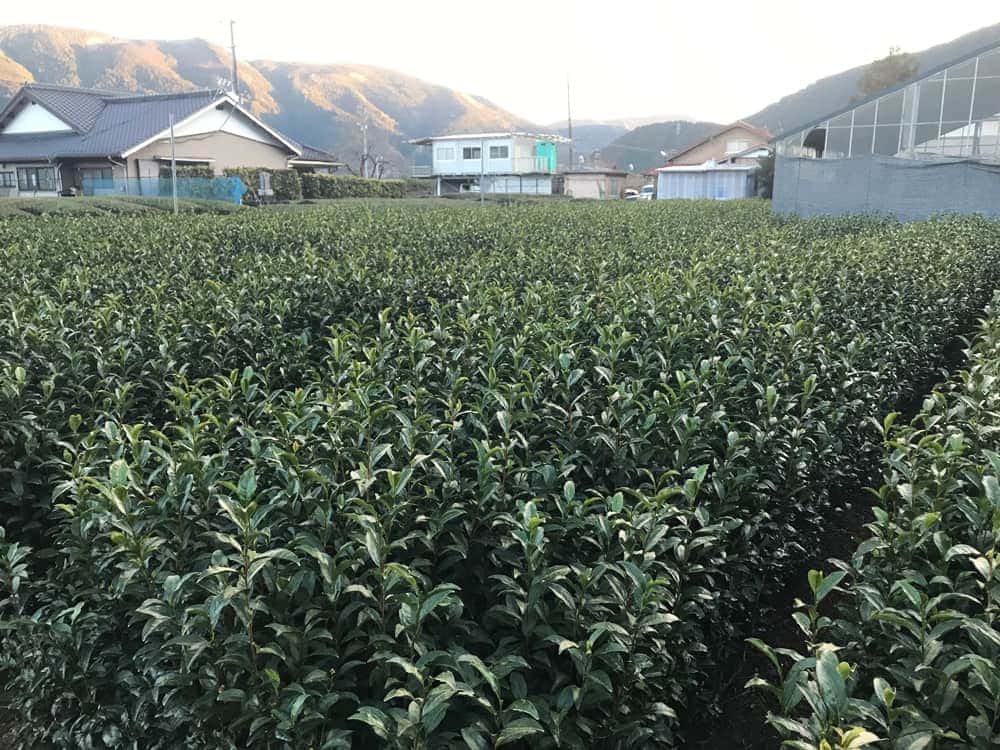 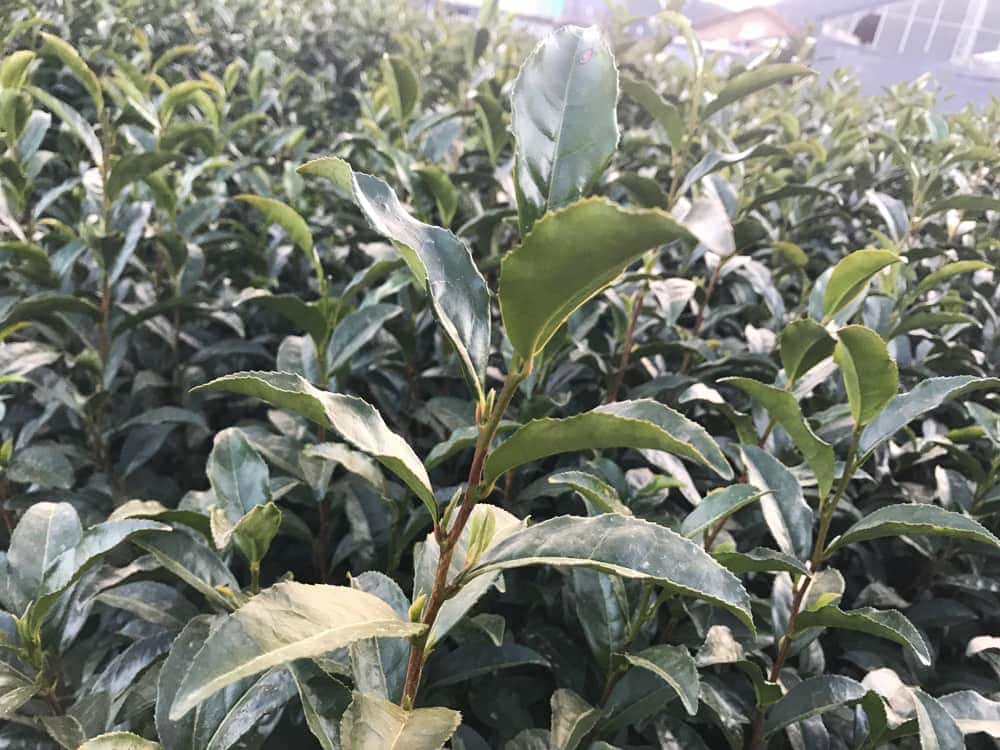 Kimio Ishiyama “To process tea, we need to trim tea bushes. Once in the autumn and one more time in the winter we do it, which changes the of the tea. If we skipped this effort, it would turn out bad in the following year. Now is the time to trim tea bushes.”

— “It’s new for me to see a tea farm so closely. I feel this is different from what we generally imagine.”

Kimio Ishiyama “We use a tea hand-rolling process here, so we grow tea leaves as freely as possible. Fewer tea buds come out with more effort to pick them up by hand. However, the taste is good. This is a tribute to the Imperial Family. Meanwhile, a machine-based process is different from the hand-rolling process. A machine trims all the buds sticking out the machine at once. More specifically, many buds come out from arranged leaves, which farmers trim at once using a machine to make a semi cylindrical-shaped tea farm.” 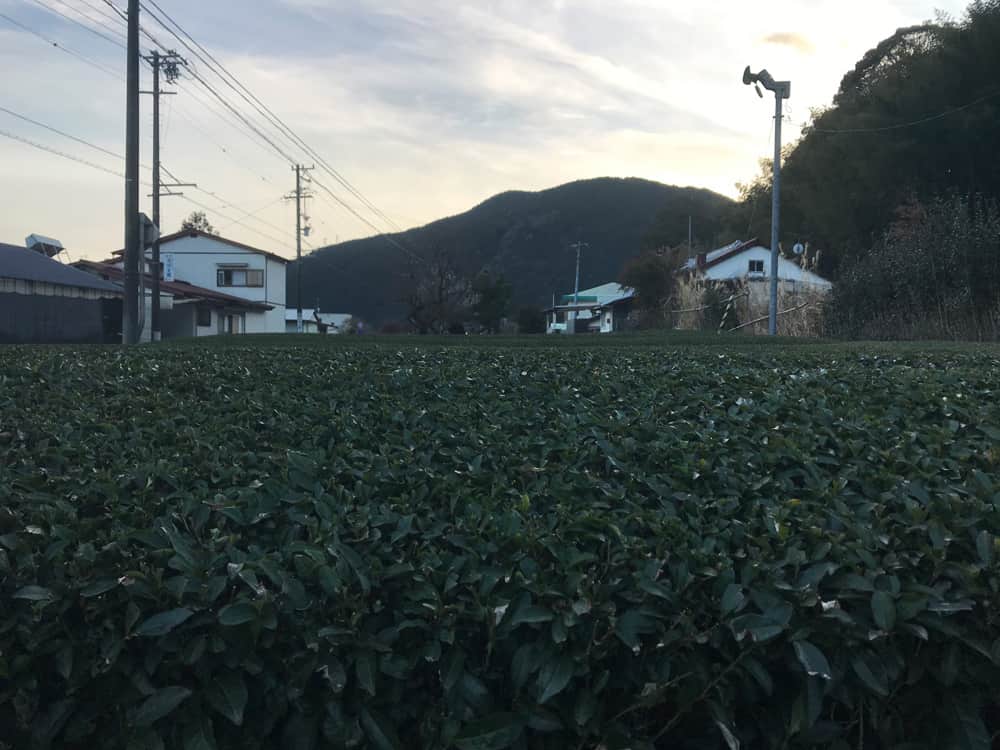 — “I see, the tea buds only come out of the space between the tea leaves on the semi cylindrical-shaped tea farm, and you trim the buds using a machine at once. On the other hand, in the process you showed me at first, you put your hands into the space between the leaves to roll each bud. Although you can get fewer buds, it’s more delicious.”

Kimio Ishiyama “Yes. By the way, Ryo-gochi and Kawane have different soil and water, so each tea has each taste. The nature of soil seems to change around the downstream of Kawane Onsen, so does the quality of water. Honyama area has Abe River basin while Kawane area has Oi River basin. That’s why even aroma is not the same between these teas.”

— “It’s interesting to learn the origin of nature where farmers make tasty things. I can’t stand this delicious tea of Shizuoka declining. Tea is a culture. I want to save it.”

Kimio Ishiyama “You’re right. The loose leaf tea industry of Shizuoka is facing a critical situation. I recommend you visit the Chamber of Tea Association of Shizuoka Pref. This is the top of the tea industry in Shizuoka. Haven’t you ever seen a black flag describing Shizuoka Chaya? This is a part of the chamber’s activities to promote Japanese tea of Shizuoka.”

— “The top of the tea industry in Shizuoka? This organization is new to me. I’ve seen the Shizuoka Chaya flag in various places, but I didn’t know that it was a project of the Chamber of Tea Association of Shizuoka Pref. The local government prepares a wide range of actions. Although my influence is limited, I also want to make a contribution revitalizing tea of Shizuoka.”

Kimio Ishiyama “We live in the internet era today. We don’t have much knowledge, but let us join you if we have a chance.”

Yamakaso Tea Farm holds events about Kawanecha every season, and many celebrities visit them as their website shows. You can book them via the website or phone.

“Hard-working tea farme” runs Yamakaso Tea Farm where you can easily visit to enjoy events and delicious Kawanecha. Touching the origin of the tea and sensitive nature, enjoy a relaxing time there.

Thank you for reading the report of Yamakaso Tea Farm by our chief editor.