Horai Bridge 897.4 (Yakunashi) Teahouse is a Shimada Teahouse located at the foot of the longest wooden pedestrian bridge in the world 【Shimada City, Shizuoka Prefecture】

The Oi River, which flows through Shizuoka Prefecture from its source in the 3,000-meter-high mountains of the Southern Alps and into Suruga Bay. The 2.4-meter-wide, 897.4-meter-long Horai Bridge was built over the Oi River on January 13, 1879. On December 30, 1997, it was recognized by Guinness World Records as the longest wooden pedestrian bridge in the world. It became famous as a tourist attraction as well as a local farming road. 897.4 Horai Bridge (Yakunashi) Tea House opened on March 20, 2018 at the side of Horai Bridge. Visitors can enjoy the history of Horai-bashi Bridge, Shimada’s tea, and Shimada’s excellent products.

What is Horai Bridge 897.4 Teahouse

Horai Bridge 897.4 (Yakunashi) Teahouse is a teahouse that opened on March 20, 2018 at the foot of Horai Bridge, the longest wooden pedestrian bridge in the world over the Oi River. The facility is maintained by Shimada City and managed by the Shimada City Tourism Association. 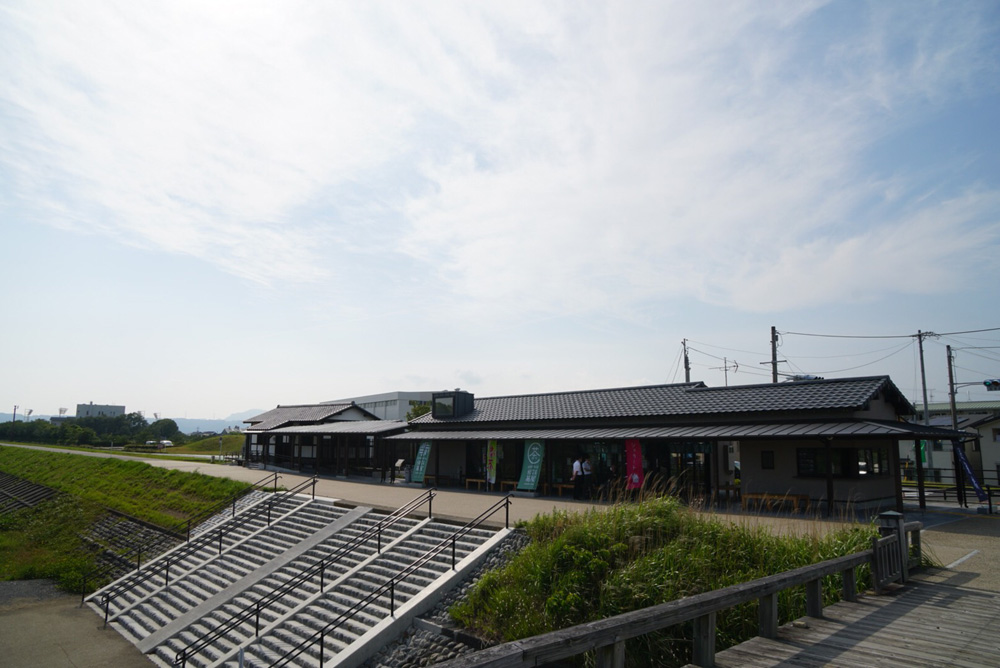 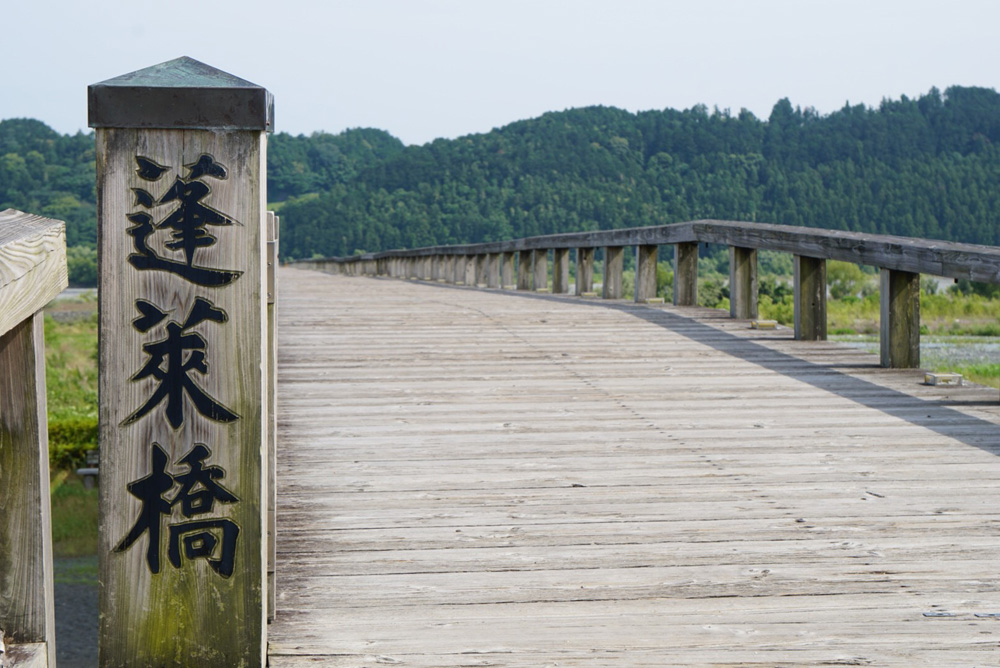 The 879.4-meter-long Horai Bridge is said to be a bridge of good luck because the combination of the numbers 8794 can be read as “yaku-nashi” (no bad luck) in Japanese. The tea house was thus named Horai Bridge 897.4 (no bad luck) Tea House. 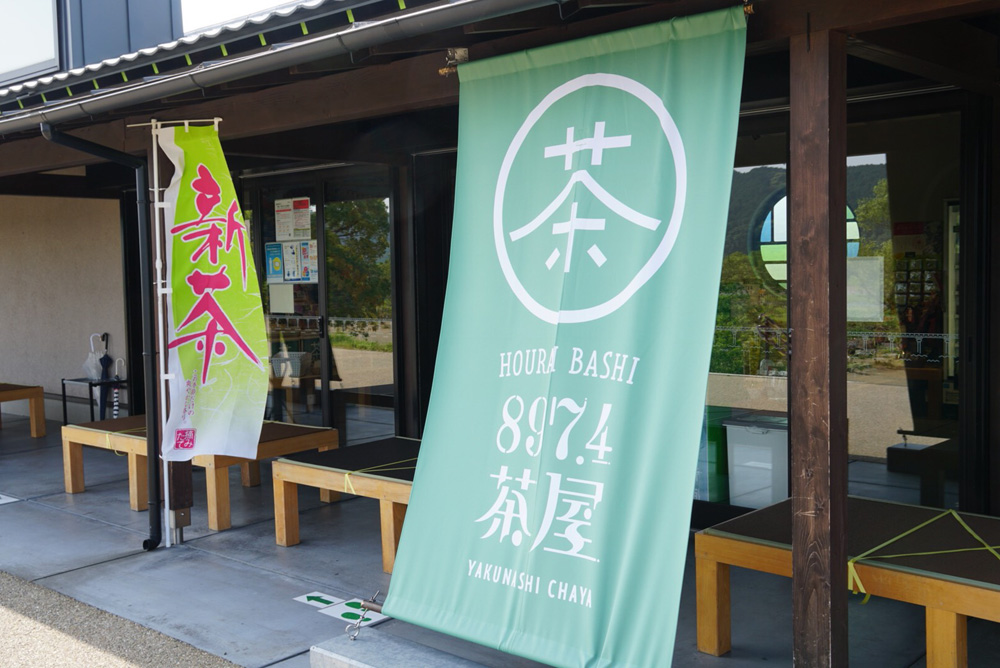 ▲Built on the left bank of the Oigawa River, the teahouse is a one-story timber structure with an old-fashioned appearance. It is reminiscent of the nearby Shimada-juku Oigawa-river crossing ruins.

Entering the teahouse from the entrance, you will see a huge nishiki-e (brocade picture),”Yoritomo ko no Oigawa gyoretuzu” (1863), by Utagawa Hoyen. 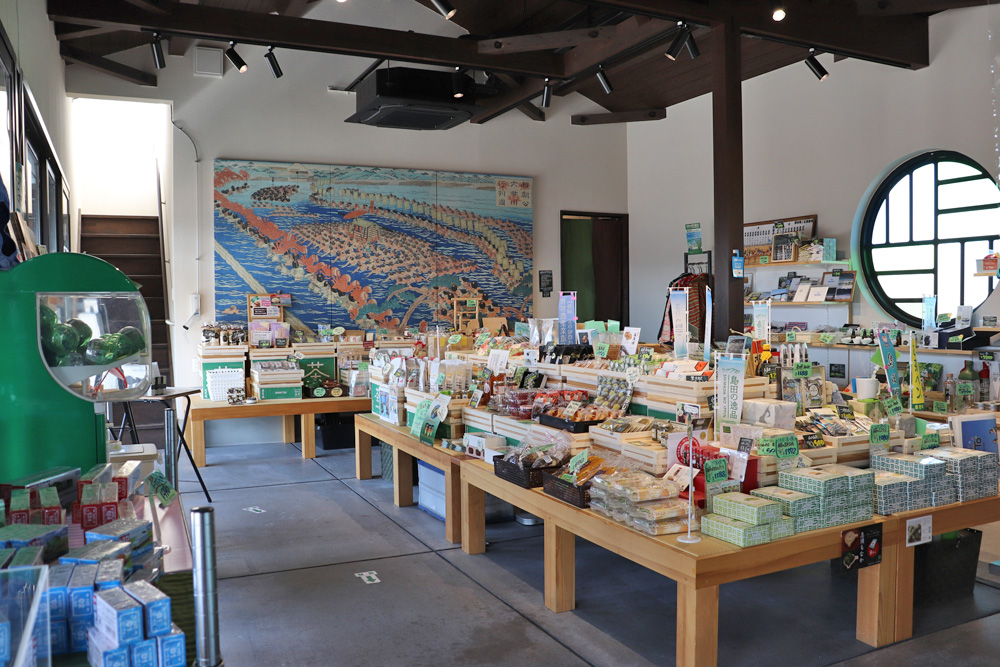 ▲The stained-glass round window is reminiscent of the 897.4 (Yakunashi) teahouse’s round logo

A counter set up against a blackboard with tea information is where tea is served to eat-in or take-away. 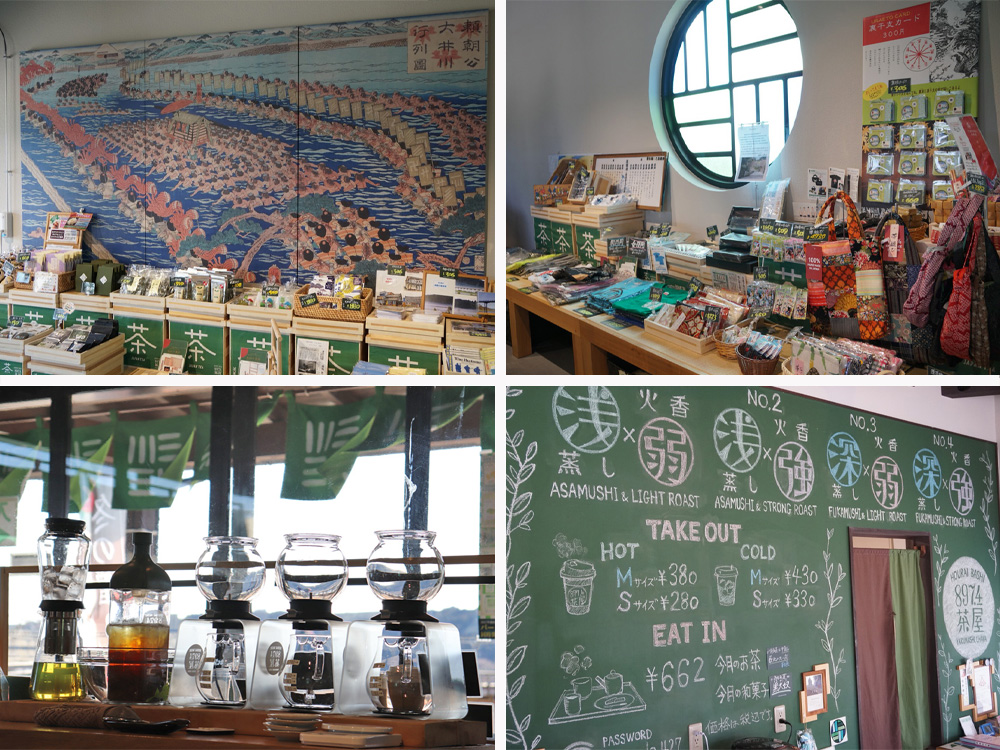 On shelves made of stacked antique tea boxes are displayed a variety of Shimada City souvenirs, such as Sasukien rusks and tea insignia pens. 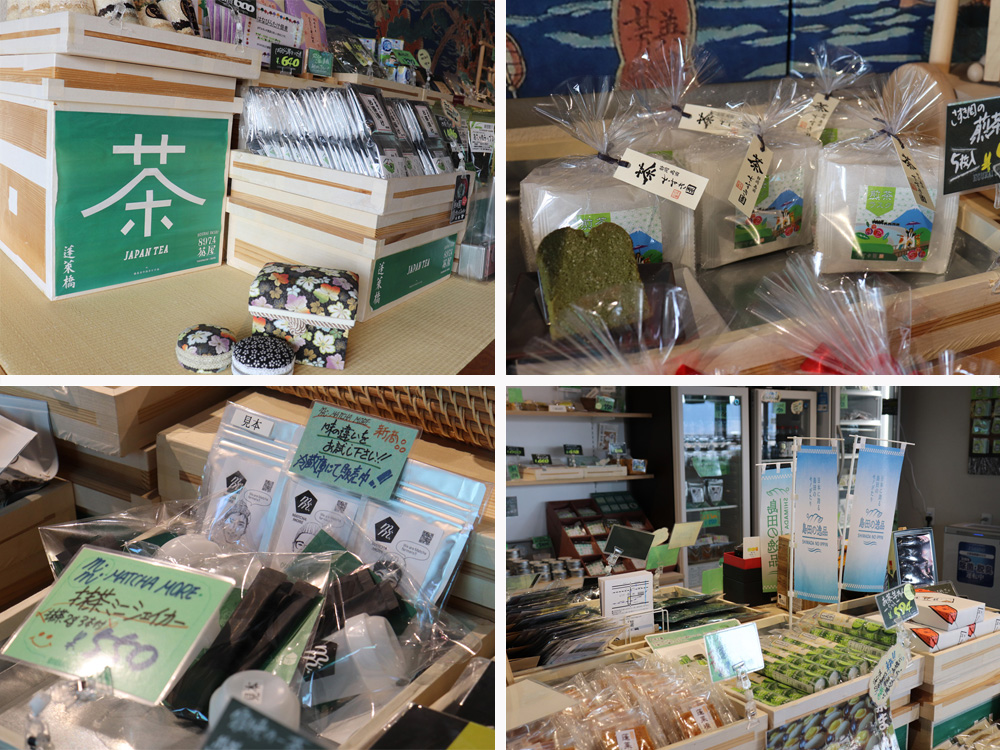 From the stairs at the back of the teahouse, visitors can view the Horai Bridge and the Oi River together. 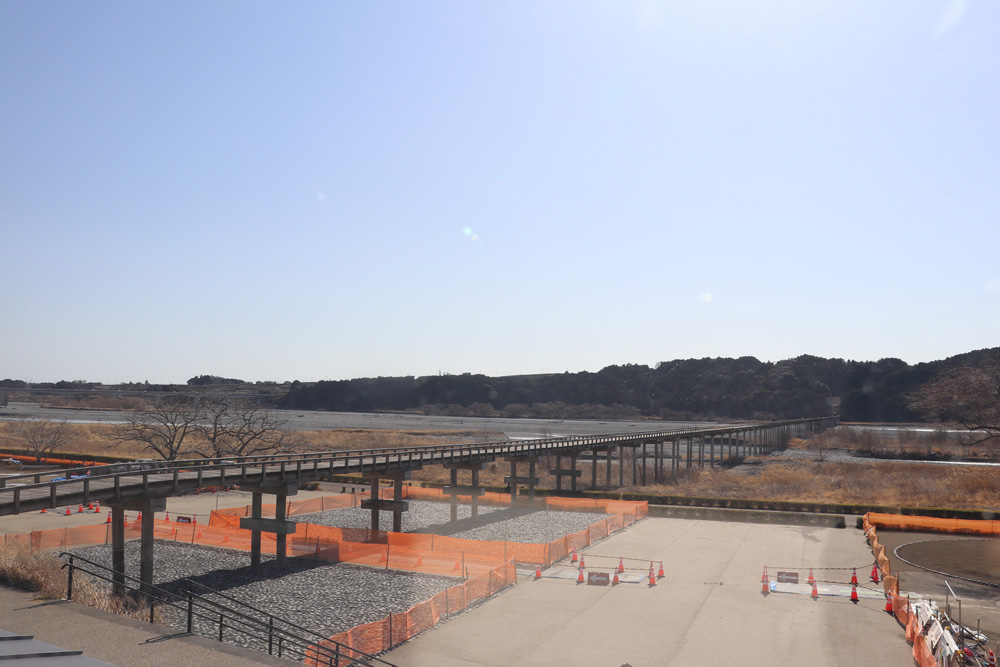 After receiving your order, the tea is brewed slowly and carefully by the waiter using a siphon-type extraction device. 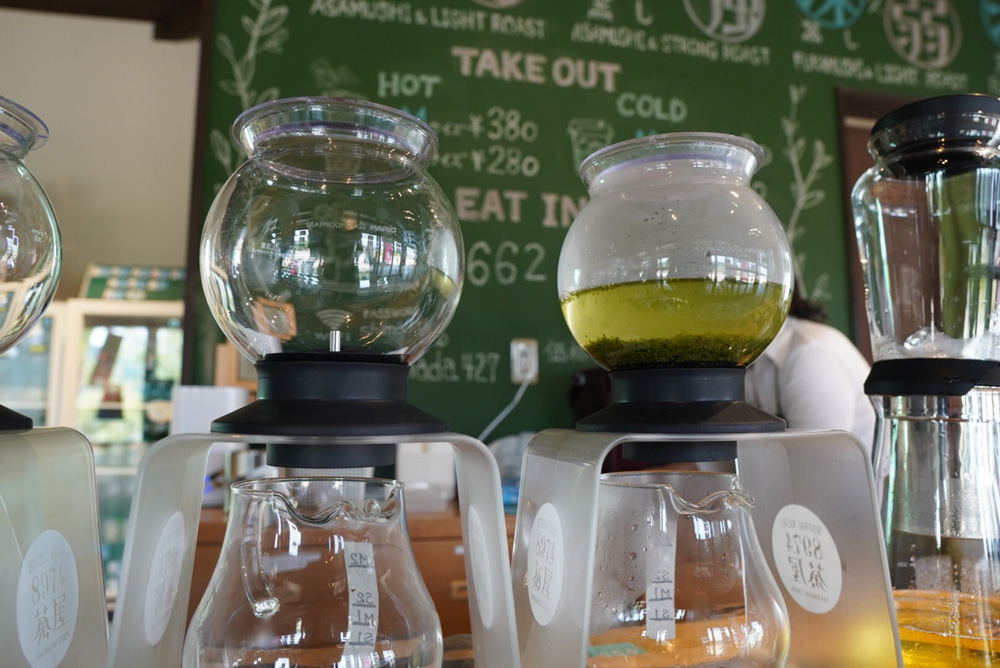 cold-brewed green tea is prepared by the slow drip method used for coffee brewing. The tea is brewed drop by drop over time in ice water. We recommend that you try the rare ice-dripped Shimadacha with its concentrated tea flavor and refreshing aroma that reminds you of nature. Available in M and S sizes, the tea changes depending on the season. 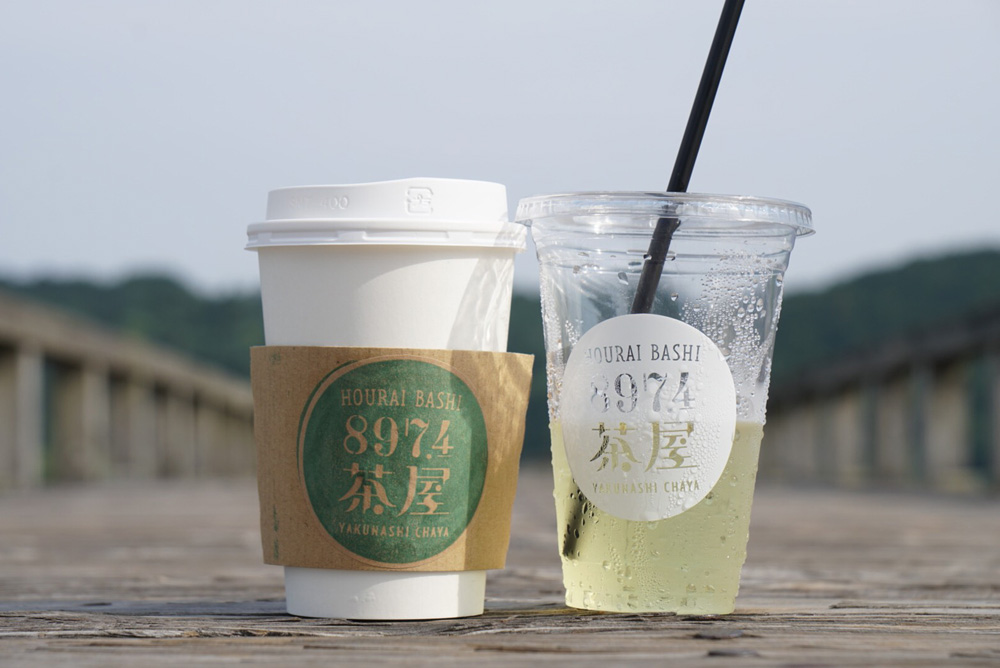 ▲Take-out tea is also great to enjoy while crossing the Horai Bridge.

Three types of soft serve ice cream are available: sencha flavor, milk flavor and a mixture of sencha and milk. You can choose from cones and cups. 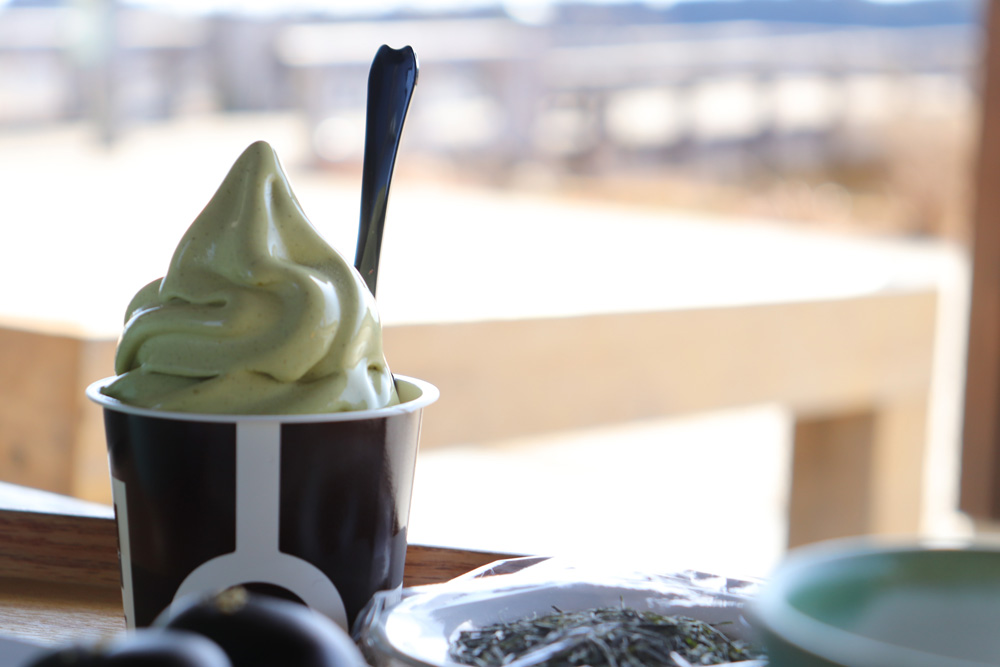 An eat-in green tea set includes a cup of the season’s recommended tea brewed in a teapot and served with tea cakes. The tea is brewed with a timer and served with a view of Horai Bridge. The staff will teach you how to brew the tea beforehand, so you’ll be guaranteed to brew a good cuppa. 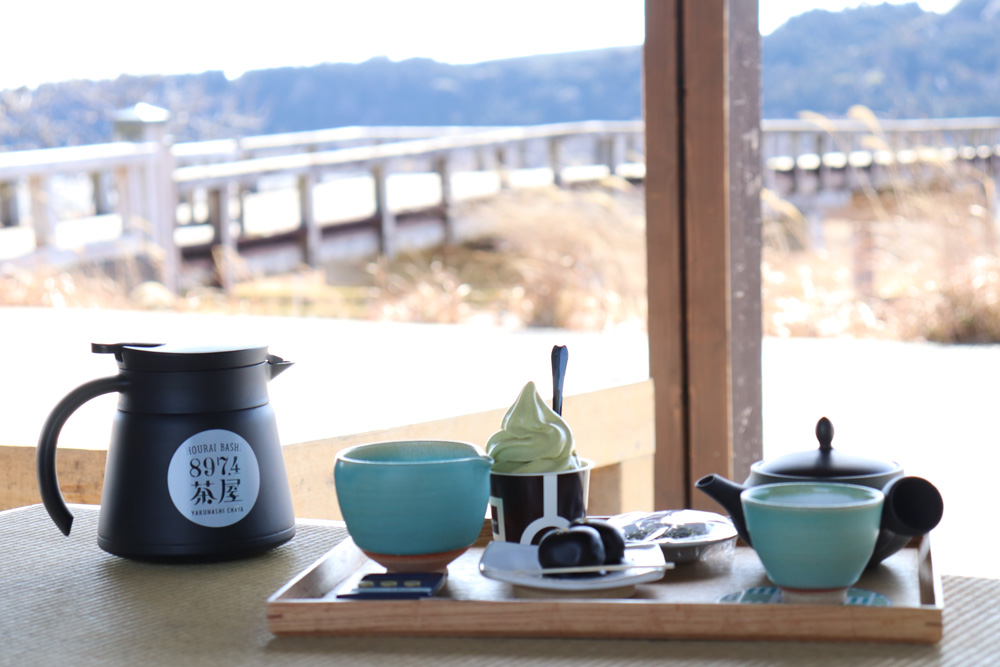 ▲The image shows an order of sencha ice cream as part of the set.

The glossy, pitch-black, round-shaped sweets are “Kuro-Daiyakko,” which are high-quality koshi-an (sweet red bean paste) wrapped in thin yokan (sweet jellied-potato jelly). The signature product of Shimizuya, a long-established Japanese confectionery with the longest history in Shimada. The slightly salty taste of the outer yokan and the sweetness of the red bean paste are perfectly intertwined in this delicacy. It goes well with Shimada tea and is recommended as a souvenir. 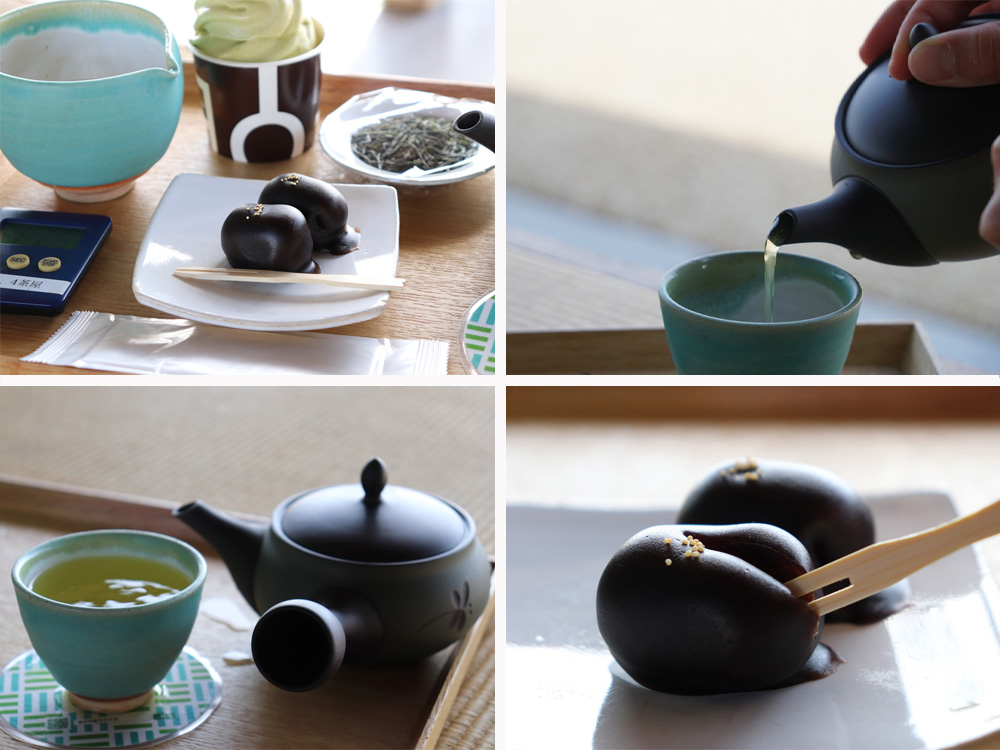 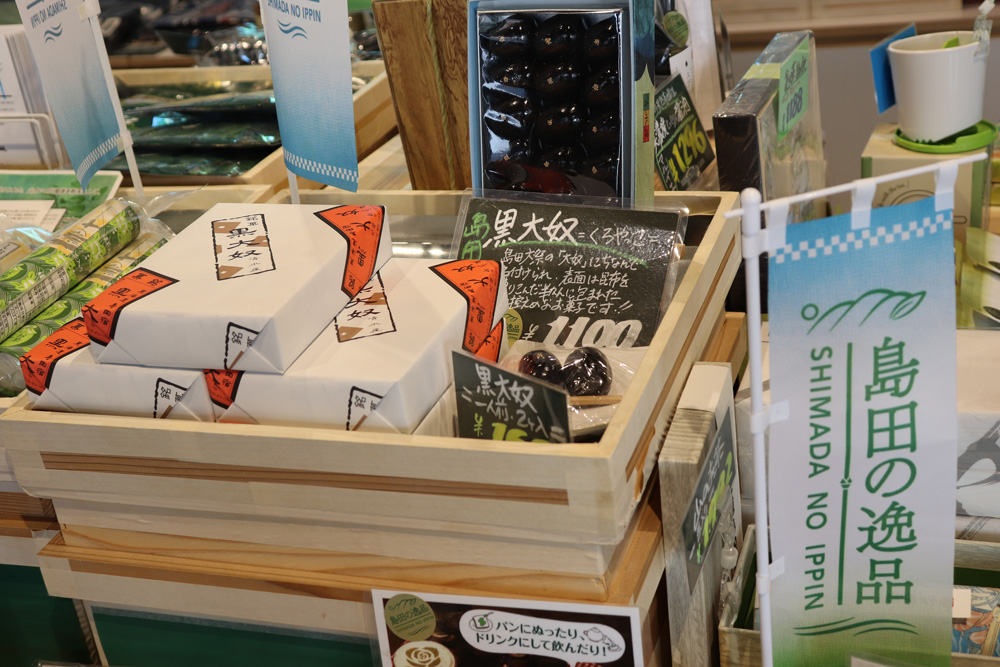 The Horai Bridge 897.4 (Yakunashi) Teahouse also serves items such as oshiruko (sweet red-bean soup) in the cold winter and kakigori (shaved ice) and gelato in the hot summer. 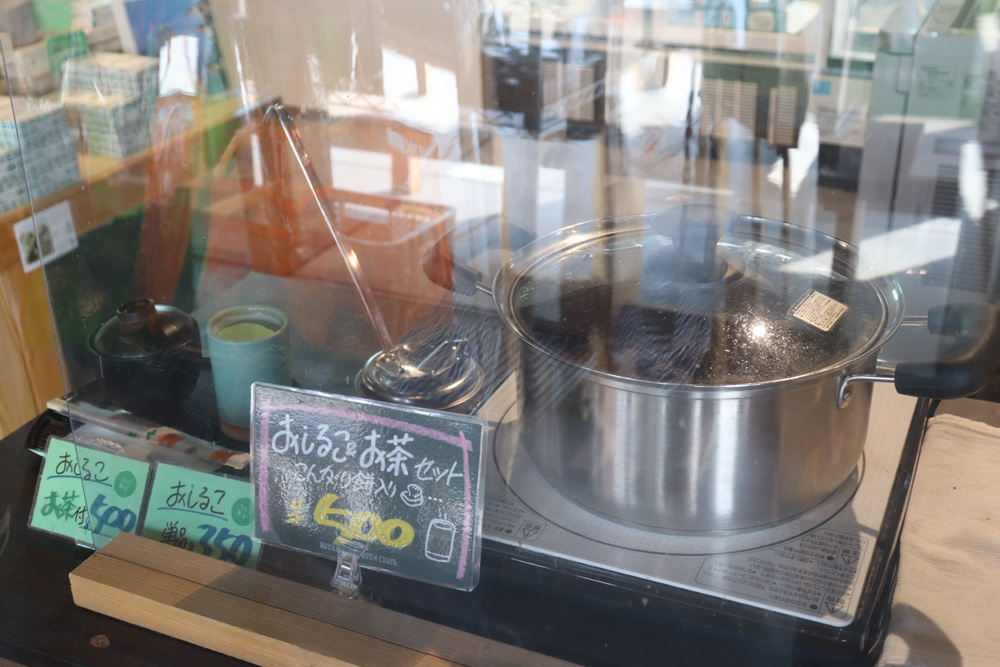 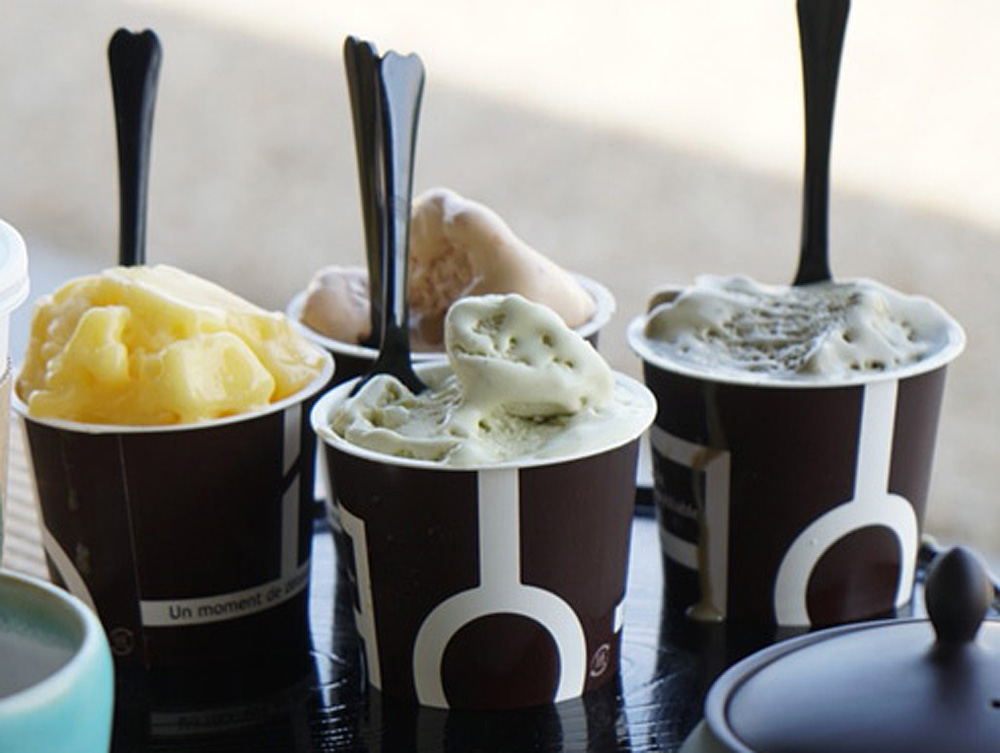 What is Horai Bridge, the world’s longest wooden pedestrian bridge?

Horai Bridge is a wooden pedestrian bridge over the Oigawa River, a large river that flows through Shizuoka Prefecture and empties into Suruga Bay, with its headwaters in the 3000-meter-high mountains of the Southern Alps.It is one of a very small number of toll bridges in Japan, open only to pedestrians and bicycles.

During the hours of 8:30 a.m. to 5:00 p.m., visitors pay a fee to the bridge keeper stationed in the guard house at the side of the bridge before crossing. (The bridge may be closed to traffic during typhoons and storms.) 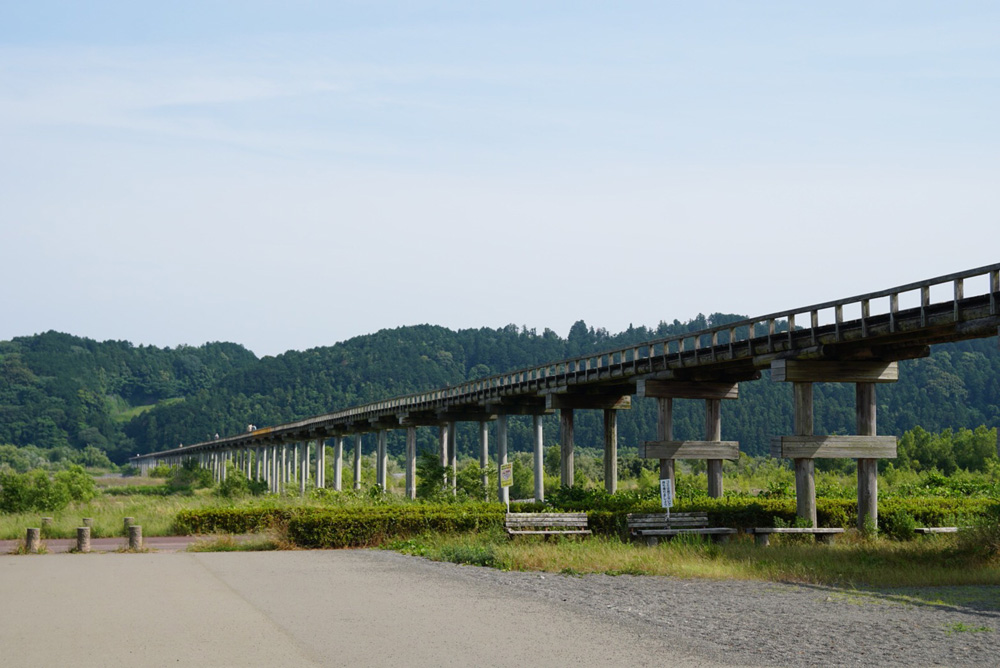 The bridge is 897.4 m long and 2.4 m wide, and is considered a bridge of good fortune because 8974 can be read as the word “yakunashi” (meaning “no trouble”).It is registered as one of Fujinokuni’s Angel Power Spots and in 1997 was recorded in the Guinness Book of World Records as the longest wooden bridge in the world. 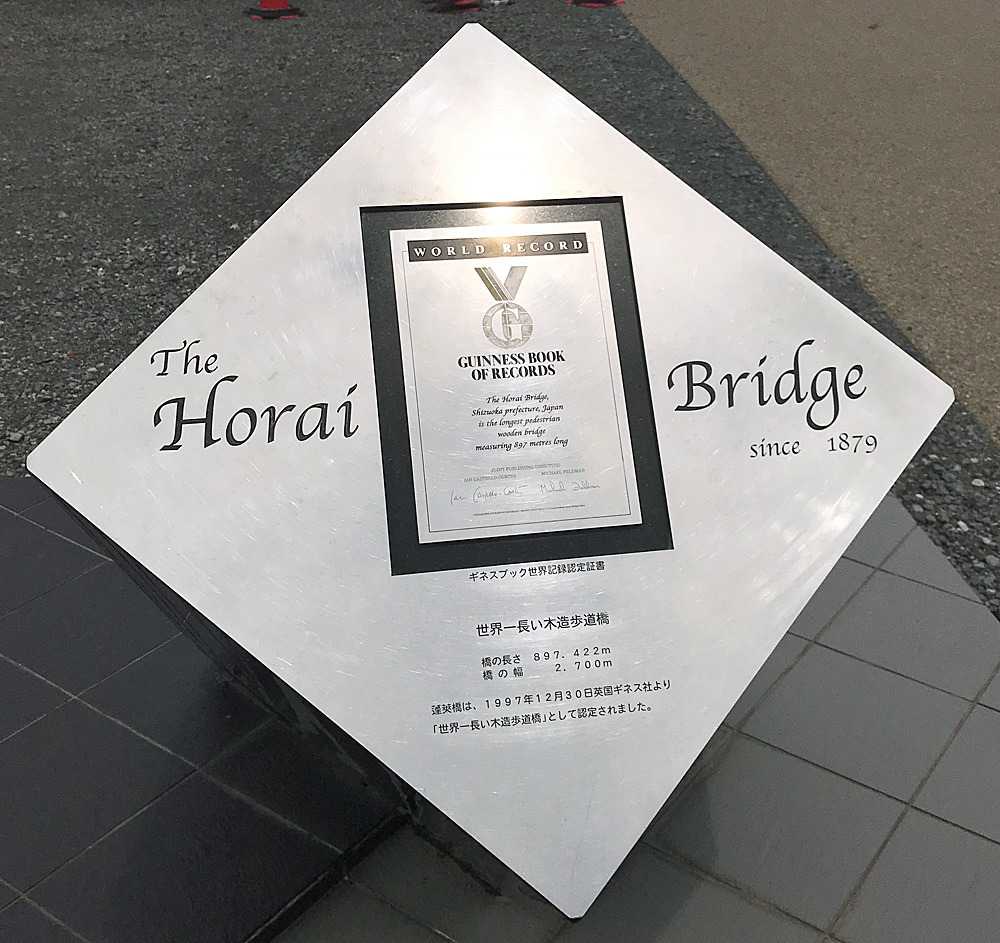 This is how the bridge came to be called “Horai Bridge.”

As one might expect of the longest wooden pedestrian bridge in the world, the bridge continues to extend out of sight, and you cannot see the goal point at all. It takes about 30 minutes to reach the other side. 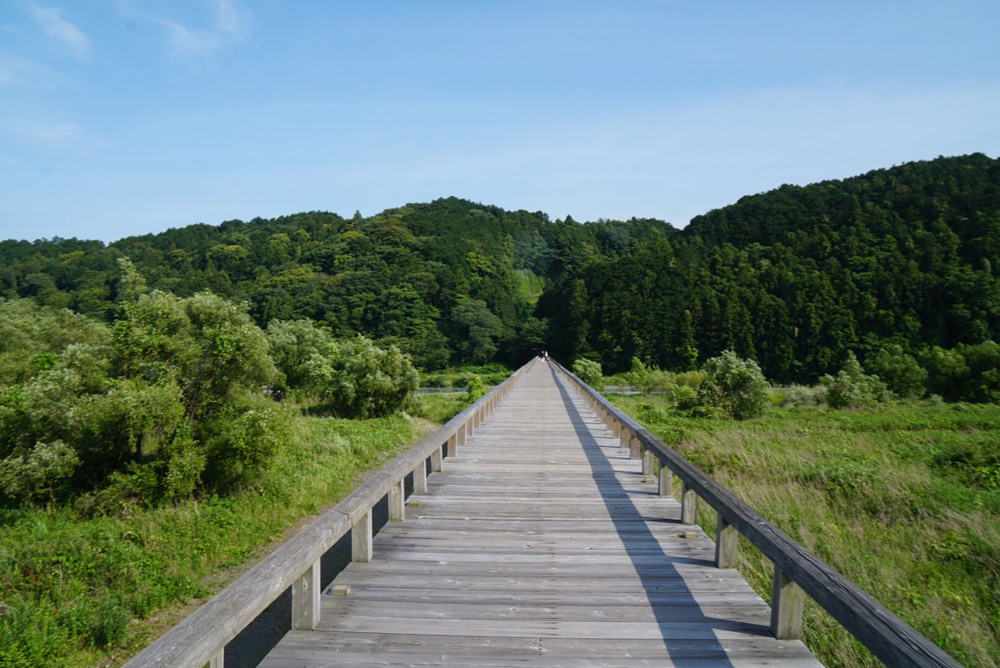 Cross the bridge on a clear day and enjoy the magnificent natural environment with a pleasant breeze blowing across the Oigawa River, the gentle sunlight, the shimmering surface of the water just below and the sound of the murmuring clear stream. Combined with the low 50cm parapet of the bridge, you may feel as if you are being sucked into the Oigawa River. 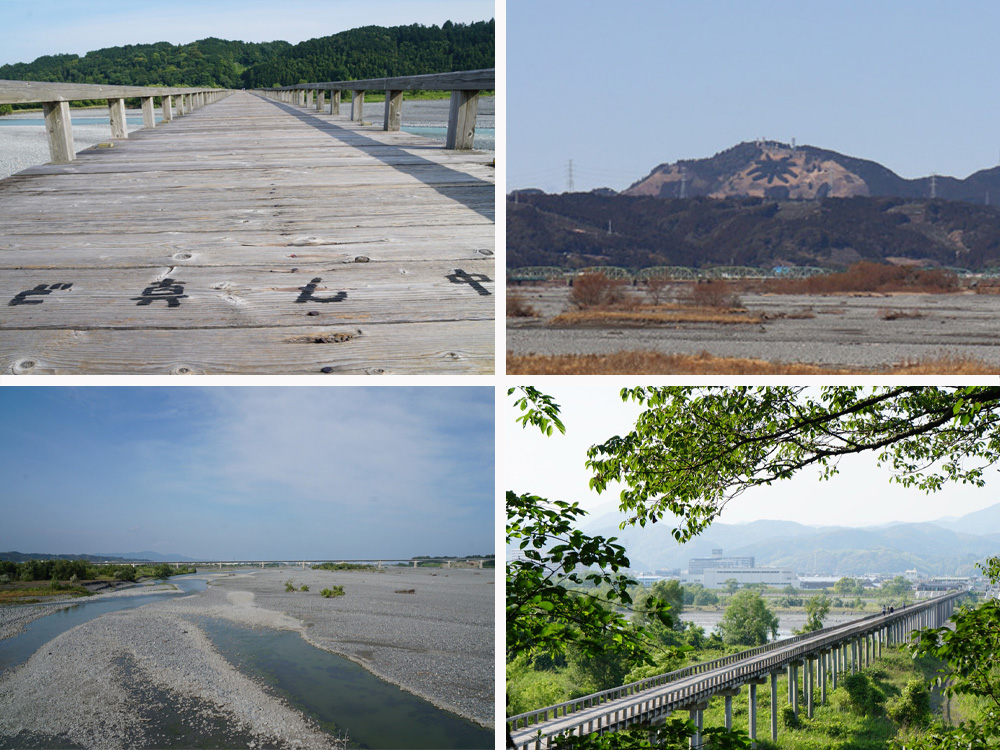 ▲The middle position of the bridge is marked with a board as “Domannaka.”

In March 2003, LED lights were installed on the Horai Bridge, and as the sun sets, the green light illuminates the outline of the bridge magically. （The bridge is illuminated until 9:00 p.m. on weekends.)

Why was the Horai Bridge built?

During the Edo period (1603-1867), the Oigawa River was forbidden to be crossed by any bridges or ferryboats because of its role as a defense for Sunpu Castle. Therefore, the only way to cross the Oi River was to have someone carry you on their shoulders or carry you on a vehicle called a palanquin. 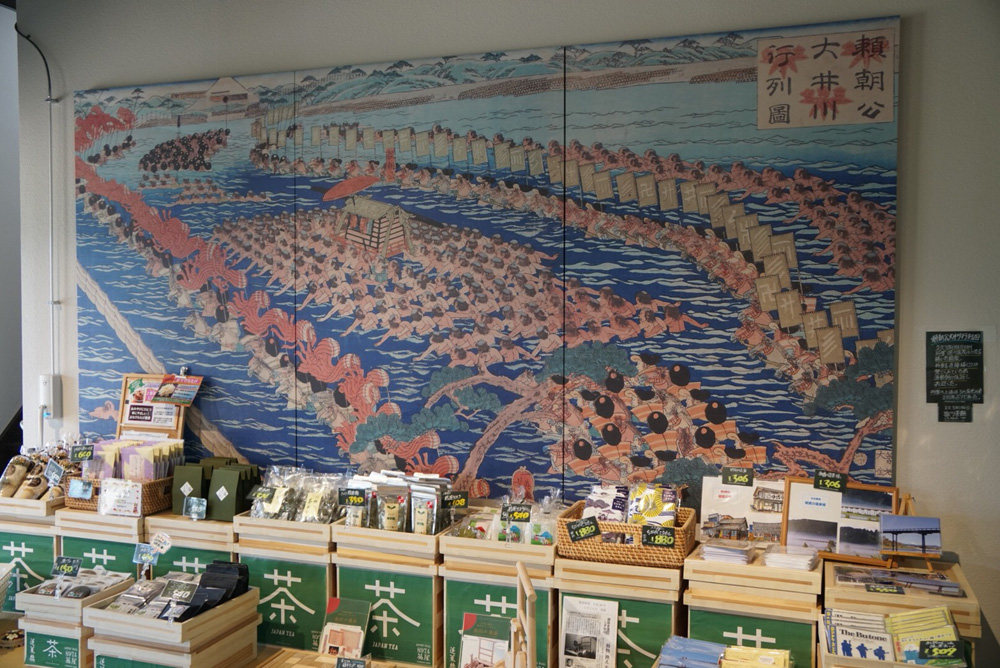 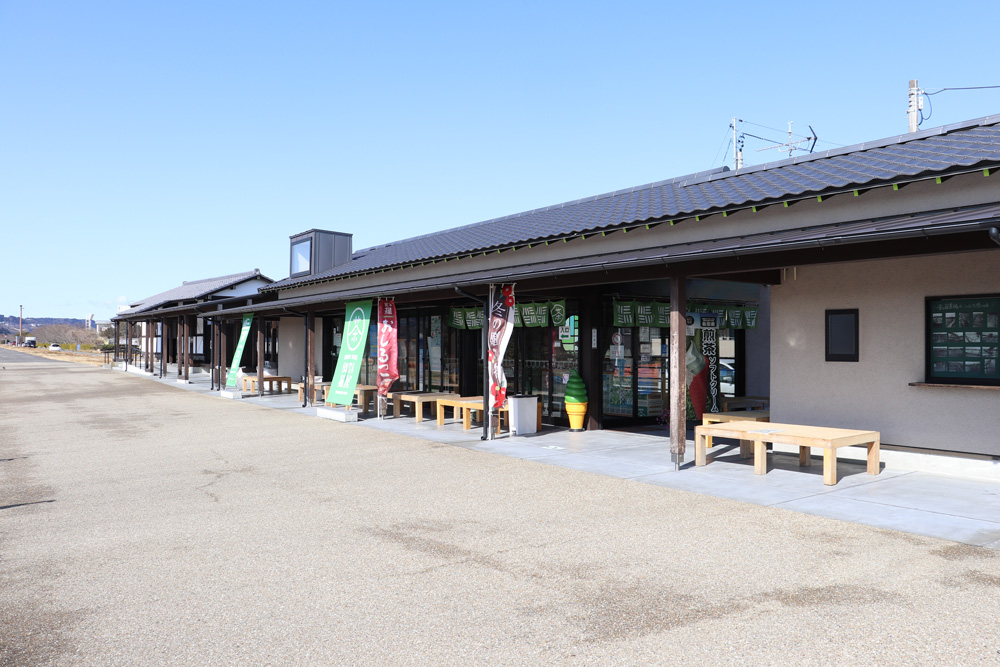 As the Edo period came to an end, in July 1869, the old shogunate vassals of Edo began to cultivate Makinohara, located on the right bank of the Oigawa River, and started a tea business. As the tea industry flourished, the representatives of the tea cultivators, who felt inconvenienced by the reliance on the “kawagoshi ninsoku” to get to and from the other side of the river, petitioned the then Shizuoka prefectural governor to build a bridge across the Oi River. 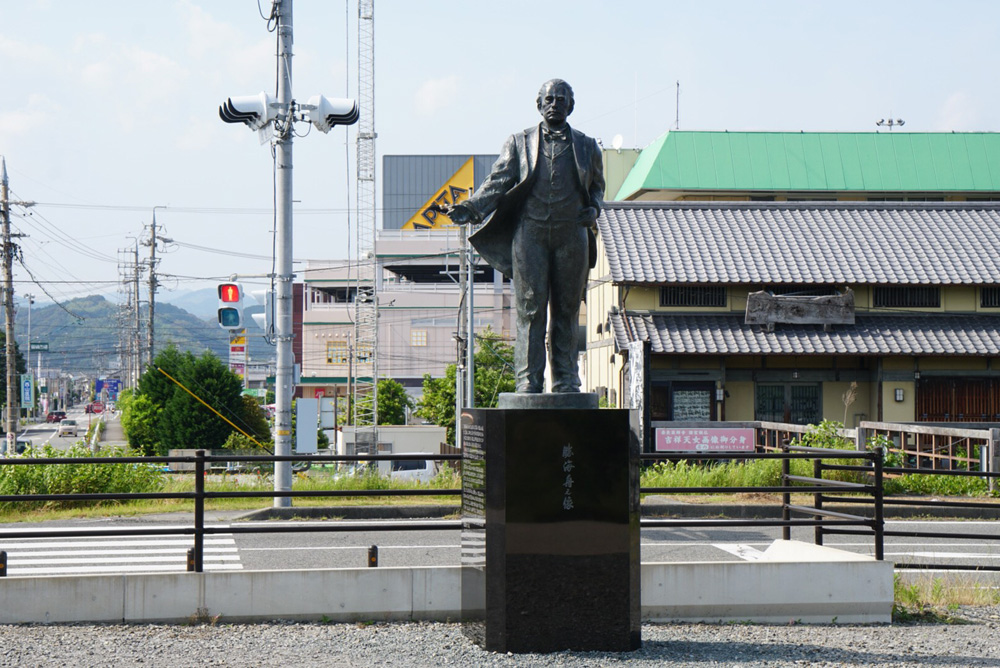 ▲A bronze statue of Kaishu Katsu was erected at the foot of Horai Bridge to commemorate his great assistance in the cultivation of tea fields.

Permission was granted, and on January 13, 1879, the Horai Bridge was built to connect the Makinohara Plateau, which had been cultivated as tea fields by the former shogunate vassals, and Shimada-juku on the Old Tokaido Road. 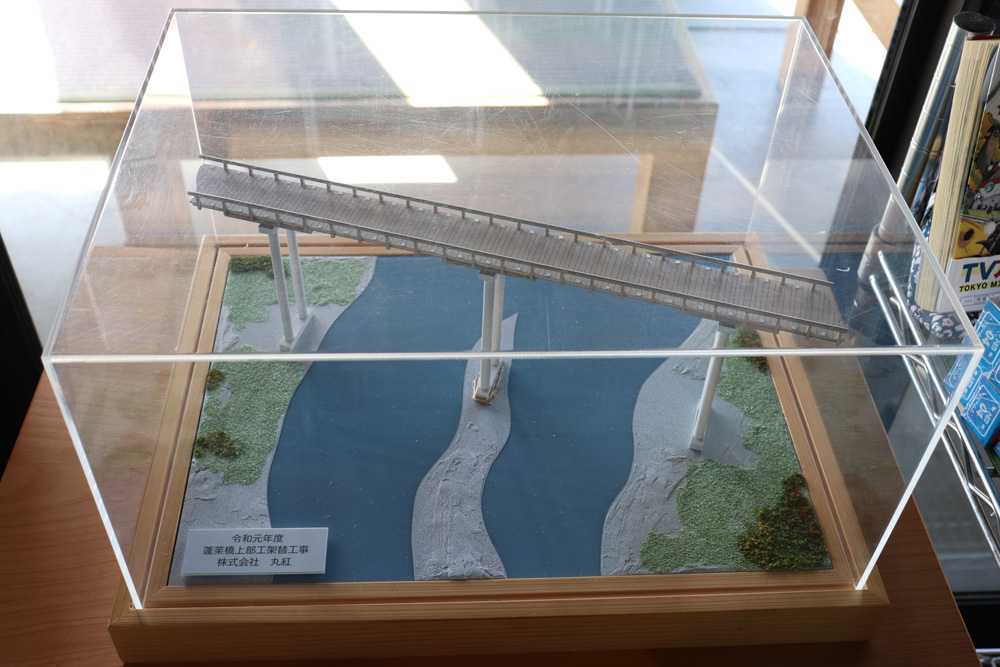 Thus, Horai Bridge came to play an important role as a farming road, and from this point on, Makinohara became one of the most famous tea plantations in the country. It is still used as a farming road today, and is both a sightseeing spot and a valuable historical landmark. 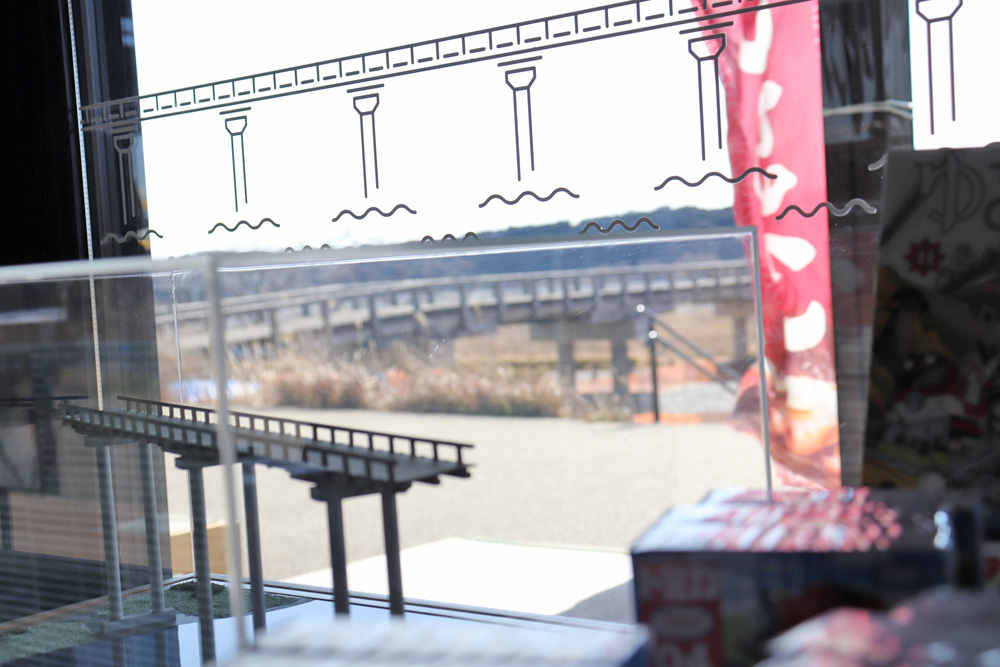 The Horai Bridge was damaged every time the Oi River swelled and flooded, and the bridge legs were replaced with concrete ones in April 1965. Since then, the bridge has continued to be damaged by typhoons, etc., and restoration work has been carried out repeatedly every few years. 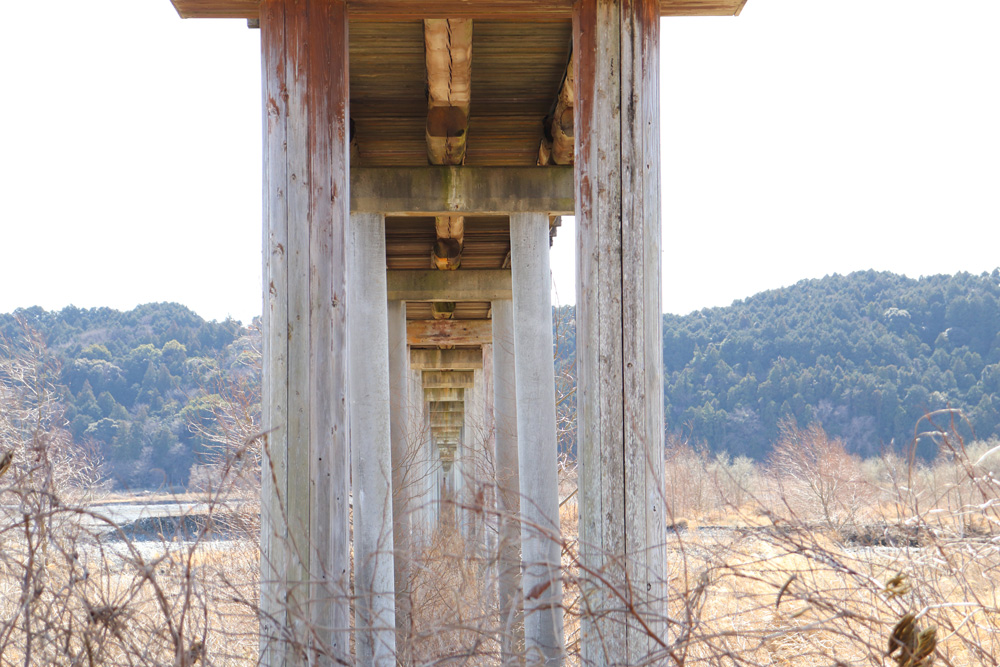 The other side of the bridge is a walking path with small stalls, a bell for praying for long life, a statue of the Seven Gods of Good Fortune, and other points of interest. 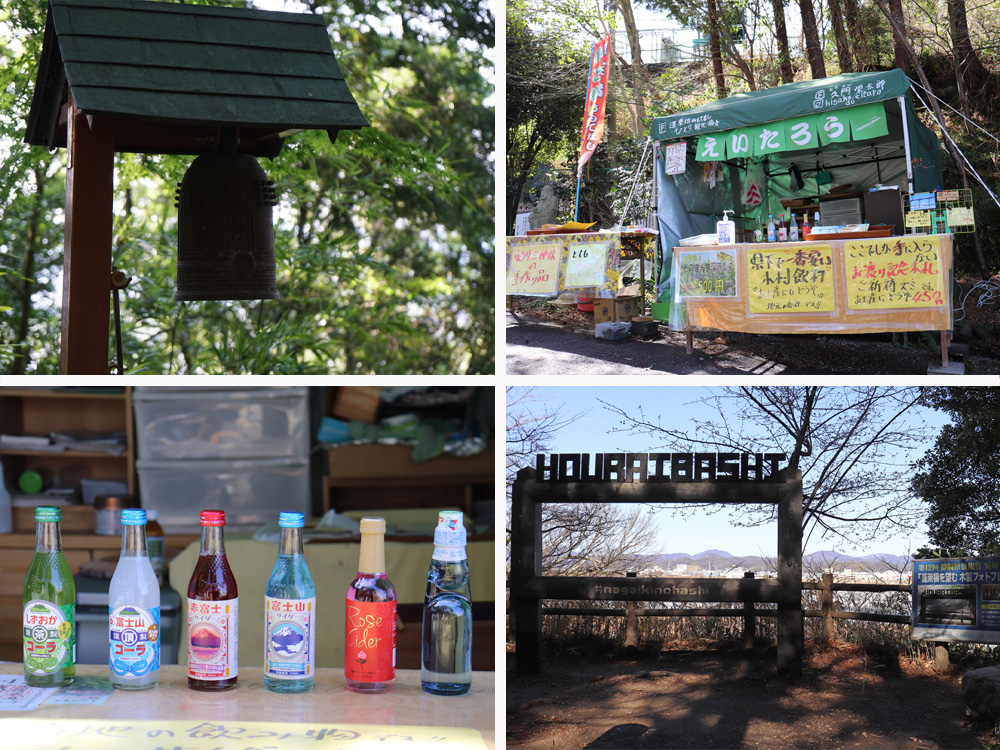 ▲The stalls on the other side of the river offer rare beverages that even residents of Shizuoka rarely encounter.

Horai Bridge is often used for filming movies and TV dramas, and is now one of the most popular tourist attractions in the city, visited by more than 150,000 people a year. The large free parking lot provides convenient access to the area. After a day of sightseeing or strolling around the area, why not stop by Horai-bashi 897.4 (Yakunashi) Teahouse for a cup of tea?